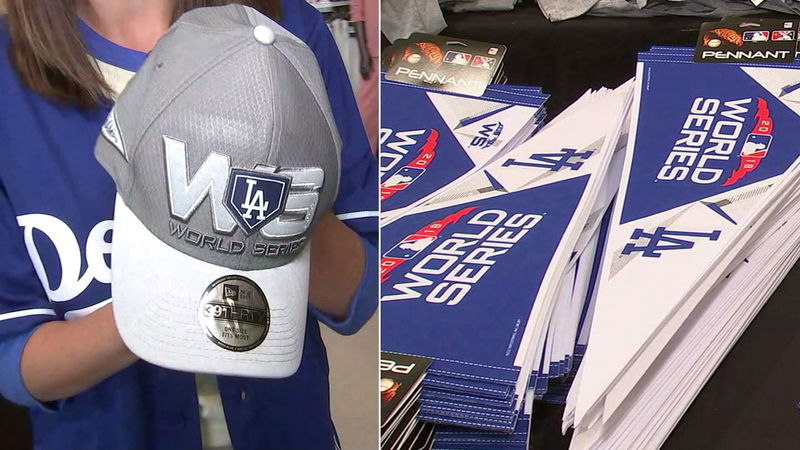 PASADENA, Calif. (KABC) -- Dick's Sporting Goods locations around the Southland opened at the crack of dawn Sunday for Los Angeles Dodgers fans to scoop up their 2018 World Series merchandise.

Dodgers fans are in high spirits after their team clinched a spot in the World Series, taking the Milwaukee Brewers in Game 7.

As the boys in blue celebrate back-to-back National League championships, fans are ready for the faceoff against the Boston Red Sox.

The Dodgers are headed to the World Series for the second straight season after defeating the Milwaukee Brewers in Game 7 of the National League Championship Series.

"Yesterday was just mind-boggling, and it's just...everybody was just nervous and jumping up and down, and I think we're going to take it this year," said fan Ed Legarreta.

The 2018 NLCS gear rolled out Saturday night at Dick's Sporting Goods after the big win. The store stayed open late and reopened Sunday at dawn for eager fans to scoop up the goods.

The locker room hats and tees were the first thing fans hopped in line for. And some locations are already sold out. There's plenty of other apparel, though, as well as flags, stickers and more.

Big fan Wendy Payan and her family already have their gear, and 4-year-old Matthew wants Boston to know his team is ready.

For so many fans, this year is all about redemption.

"It's overwhelming. To be able to sit down and watch them and go to all their games - it's just been phenomenal to be part of it," said fan Daniel Diaz.

Dick's Sporting Goods stores will be open until 7 p.m. Sunday. Although some of the popular items are already gone, the store says they will be restocking items throughout the day and all week.