Dodgers' Yu Darvish placed on DL with sore back 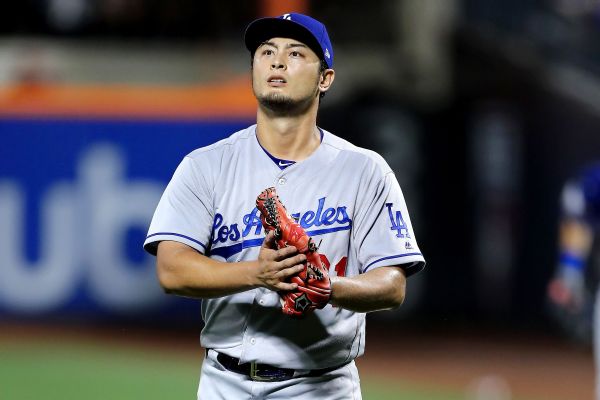 Los Angeles Dodgers pitcher Yu Darvish was placed on the disabled list because of lingering problems associated with a sore backand will miss his next start, manager Dave Roberts said Saturday.

Darvish complained that his back was bothering him during Wednesday's start against the Chicago White Sox, in which he gave up three runs on eight hits in six innings of a 5-4 win.

"Yu feels like he can physically go," Roberts told reporters before Saturday's game. "But I think as an organization, we're trying to really do what's best for him. And if there's any kind of thought to his back being sore or stiff, for us to run him out there doesn't make much sense, where we're at."

Darvish, who was acquired in a trade deadline deal with the Texas Rangerson July 31, is expected to miss just one outing. He was scheduled to pitch Tuesday against the Pirates, and Brock Stewart is expected to start in his place for that game.

Darvish has struck out 22 batters in his three outings since joining the Dodgers, compiling a 2.50 ERA in 18 innings.Overall, he's 8-9 with a 3.83 ERA in 25 combined starts with the two teams.