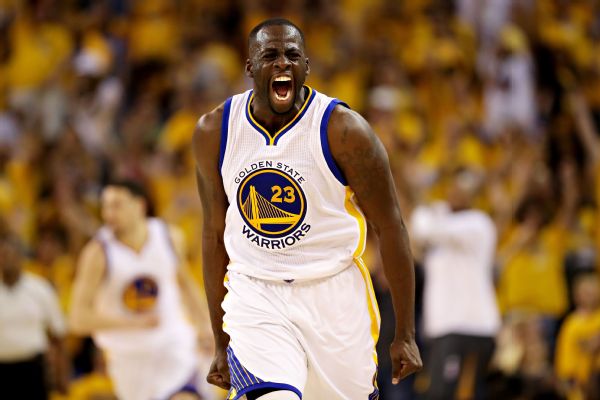 Green told The Undefeated after the Warriors' 122-96 win over the Oklahoma City Thunder on Thursday that he received an unwarranted technical foul for screaming in excitement after a block by teammate Kevin Durant. Green also believes he was assessed an unwarranted technical foul for screaming after a dunk during a season-opening loss to the San Antonio Spurs on Oct. 25.

The fifth-year NBA veteran said he is confused as to whether he will be able to yell in excitement for anything that happens in games going forward.

"I got two techs this year for yelling, 'Ahhh'?" Green told The Undefeated. "At this point, do I need to wear a mask? Am I allowed to show emotion on the floor? That's who I am. I play with emotion.

Green, known as one of the biggest trash-talkers in the league, plays with a lot of passion and has no problem speaking his mind on and off the floor. He accumulated 12 technical fouls during the 2015-16 regular season. The 2016 All-Star was also suspended for Game 5 of the 2016 NBA Finals after accumulating his fourth flagrant foul of the postseason when he hit Cleveland Cavaliers forward LeBron Jamesin the groin.

With his technical troubles in mind, Green said he has made it a point not to speak to the referees this season.

"At a certain point, you kind of get a reputation and you're judged off that reputation," Green said. "I think I've gotten a reputation for arguing calls. That's what I got techs for [last season]. I understand that. Now I don't argue calls, so why am I getting techs for yelling?"

Green said he hopes that both of his technical fouls for yelling will eventually be rescinded by the NBA. He also expects Warriors general manager Bob Myers to give the NBA a call on his behalf.

Green has not received any other technical fouls this season for the Warriors (4-1), who next face the Los Angeles Lakers on Friday.

"I look forward to getting an explanation on the first and the second one," Green said. "You can't yell after a good play? So I'm looking for an explanation for both. I think they both should get rescinded. They said I was disrespecting the referees.

"All right, I'm not talking to them no more. But now you want to give me a tech for yells? It's not like I'm standing in someone's face yelling."