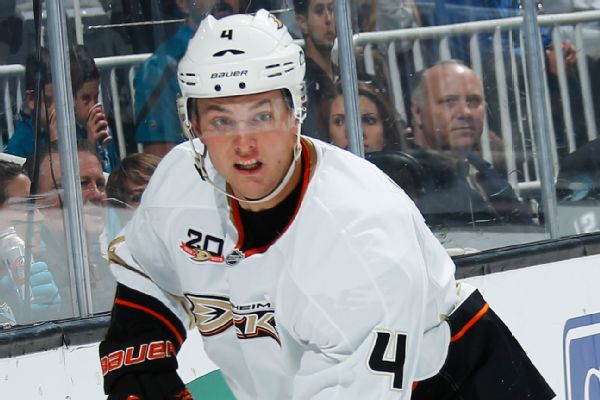 The Anaheim Ducks have signed cornerstone defenseman Cam Fowler to an eight-year, $52 million contract extension through the 2025-26 season, the team announced Saturday.

Fowler, 25, has been a fixture on the Ducks' blue line since he unexpectedly fell to Anaheim at 12th overall in the 2010 draft. The U.S. Olympian was outstanding last season, getting a career-best 11 goals and 28 assists before adding nine points in the postseason.

"Cam Fowler is the type of player we want here long term," Ducks general manager Bob Murray said in a statement. "He has the obvious skill set, but also tremendous character and a drive to succeed. As good as he is, he's not yet in his prime years, so we know the best is yet to come."

He ranked ninth among NHL defensemen last season with five power-play goals and tied for eighth with three game-winning goals.

"From top to bottom, Anaheim has always treated me right and given me a really great opportunity right from the very start," Fowler said in a phone interview. "With the coaching staff we have in place, our ownership and the roster that we have, I really feel like we're very close, and I think we've proven that."

Despite the upheaval of an expansion draft, the Ducks have kept together nearly the entire core of their perennial winner. They even re-signed forward Patrick Eaves last week, keeping their late-season trade rental for three years.

Anaheim lost depth center Nate Thompson to Ottawa and goalie Jonathan Bernier to Colorado in free agency Saturday, but quickly added Miller in a deal that benefits both sides.

The 36-year-old Miller spent the last three years in Vancouver after a decade in Buffalo. The veteran, who turns 37 years old in two weeks, replaces Jonathan Bernier as the complement to starter John Gibson.

"We're going to be teammates in this," Miller said of playing with Gibson. "As you can see with the Penguins, and it continues to pop up, you need guys to come in and step up when they're needed. My role is to be prepared and to be ready, and to also be at a high level."

The Canucks only made the playoffs in Miller's first year, losing in the opening round.

Miller's best years came with the Sabres, who drafted him in 1999. He played 11 seasons there and won the 2007 Vezina Trophy and was an All-Star. He backstopped the Sabres to the conference finals twice.

St. Louis, which acquired Miller as part of a blockbuster deal with the Sabres in 2014, hoped the goalie would be the difference maker for a team that finished the regular season with 111 points, but the Blues lost in the first round of the playoffs to the Blackhawks.

In international play, Miller led the United States to a silver medal in 2010, earning most valuable player honors for the tournament.