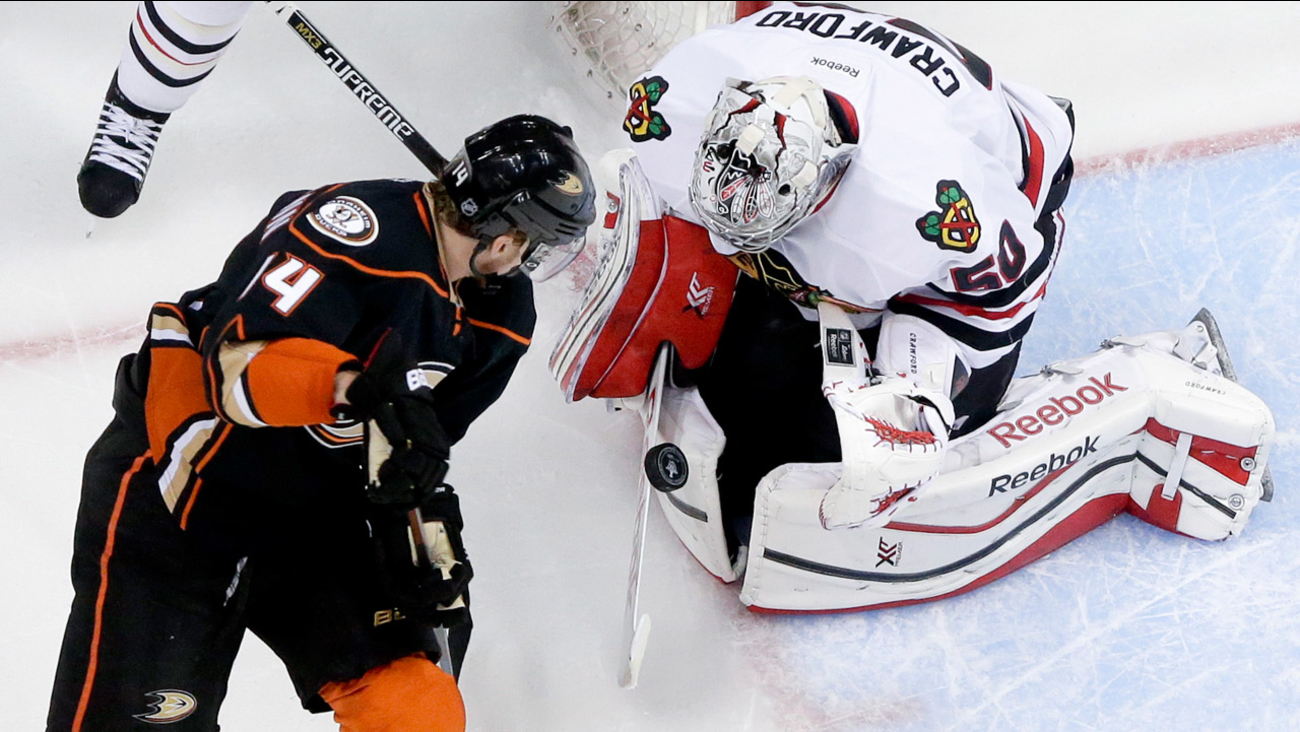 ANAHEIM, Calif. (KABC) -- Matt Beleskey scored 45 seconds into overtime, and the Anaheim Ducks beat the Chicago Blackhawks 5-4 on Monday night in Game 5 to take a 3-2 lead in the Western Conference finals.

Chicago captain Jonathan Toews scored two stunning goals in 72 seconds late in regulation to force overtime, but Beleskey barreled into the crease and scored on a rebound of Ryan Kesler's shot, flying through the air in celebration.

Kesler and Sami Vatanen had a goal and an assist apiece for the Ducks, who moved to the brink of their first trip to the Stanley Cup finals since 2007.

Corey Crawford made 23 saves for the Blackhawks, who had won four overtime games already in this postseason, including two in this series. They had all the momentum heading to OT after Toews silenced Honda Center - until Beleskey swooped in.

Game 6 is Wednesday in Chicago.

Cam Fowler and Kesler scored 32 seconds apart in a three-goal first period for the Ducks. Patrick Maroon scored with 5:15 to play before Toews' heroics.

Teuvo Teravainen and Brent Seabrook scored in the second period for Chicago, which lost a Game 5 in a tied series for the first time in its last eight tries. The Blackhawks must win two straight to reach their third Stanley Cup finals in six seasons.

These teams combined for a six-goal third period in Game 4, and they put together another memorable finish in a high-level playoff series already featuring two multi-overtime games, both won by Chicago.

After Maroon appeared to wrap it up for Anaheim, Toews scored with 1:50 left with Crawford pulled, and he did it again with 37.2 seconds left on an impossibly sharp-angled shot that somehow got through Frederik Andersen, who made 24 saves. The Ducks' Danish goalie had been mostly superb in the postseason until allowing two awful goals in Game 5, including that tying howler.

But the Ducks came out of the dressing room with fire and swiftly made the decisive rush at Crawford, who put a rebound straight onto Beleskey's stick for his seventh goal of the postseason.

Anaheim started Game 5 with a bang on back-to-back goals by Fowler and Kesler, even if they didn't quite match their three goals in 37 seconds in Game 4.