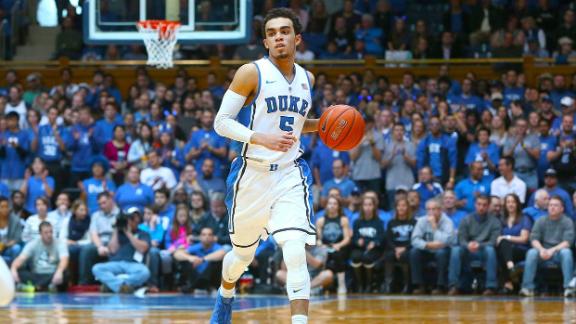 Dukefreshman guardTyus Jones, the most outstanding player during the Final Four,will be joining teammates Jahlil Okafor and Justise Winslow in heading to the NBA after just one season in Durham, coach MikeKrzyzewski said Wednesday.


"Tyus could not have done a better job for us this past year," Krzyzewski said in a statement. "We're so very happy for him and his family to have the opportunity to declare for the draft.

"He's going to get a lot better, but people have already seen him and know how he handles himself, especially in pressure situations and in the biggest games. He comes through like a champion! I loved coaching him, and I believe he'll be an outstanding professional. At this time, I think is so appropriate for him to take advantage of this opportunity."


Jones, a pure point guard who had an impressive 2.9-1 assist-to-turnover ratio, scored 23 points in the Blue Devils' win over Wisconsin in the national title game. Jones averaged 11.8 points and 5.6 assists this past season and showed the propensity to make clutch shots.


He became just the second Duke freshman with 400 points and 200 assists.

Krzyzewski said Jones is projected to be a first-round pick. Multiple NBA executives told ESPN that Jones will likely be selected in the 20-25 range in the upcoming draft. Okafor will likely be chosen first or second overall, and Winslow is expected to be taken in the top 10 picks.


"I am faced with the tough decision of returning to a place I love or pursuing my next dream. With the support and guidance of my family, my coaches, my teammates, and Duke University, I have decided to start my professional career. Even though I am entering the NBA draft, I will forever be a Duke Blue Devil."


Jones is the eighth Duke player to head to the pros after his freshman season and the sixth since 2011 -- joining a group that includes Kyrie Irving, Austin Rivers and Jabari Parker.