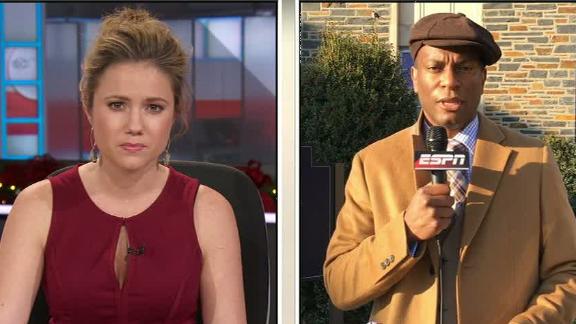 Dukehas suspended Grayson Allenindefinitely after the guard intentionally stuck out his leg and tripped an Elon player Wednesday night, an incident he later apologized for.

"We have had the opportunity to thoroughly review the incident involving Grayson Allen from last night's game against Elon," coach Mike Krzyzewski said in a statement issued Thursday morning. "As I stated last night, the incident was unacceptable and inexcusable. He took an important step last night by apologizing in person to Steven Santa Ana and Coach Matt Matheny.

"As a program, we needed to take further steps regarding his actions that do not meet the standards of Duke Basketball. To that end, we have determined that Grayson will be suspended from competition for an indefinite amount of time."

Krzyzewski said Thursday morning that he's not quite sure how long the suspension will be.

"It's a learning experience," Krzyzewski told The Dan Patrick Show. "I'm going to use it as that, as a teaching moment. And a teaching moment does not stop by giving one game. Or maybe that's what it is. I don't know that right now.

"Maybe it's three [games]. Maybe it's two weeks. I don't know. He won't play until I feel good about the entire situation and where he is at. That's my responsibility as his coach and as a teacher of young men."

ACC commissioner John Swofford issued a statement supporting the move, calling sportsmanship "one of the core values of our league" and adding that the suspension "demonstrates adherence to this important principle."

This marked the third time Allen has intentionally tripped an opposing player in the past year.One ACC coach told ESPN's Andy Katz that Allen needs help handling his actions.

Allen was defending Santa Ana late in the first half of the Blue Devils'72-61 victory.Santa Ana drove past him on the baseline, and Allen stuck his right leg out, sending Santa Ana to the floor.

Allen was assessed a technical foul. He became emotional on the bench after he found out about the technical.

"I made a really bad play. I'm sorry to him, Santa Ana," Allen, a junior, told reporters after the game. "I'm sorry to the officials who had to call that. I'm sorry to my team. It was selfish and taking away from them. I'm not proud of that at all."

Krzyzewski called the incident "unacceptable" and noted, "The right thing to do was apologize in person." The coach said he met with Allen alone after the game, and that led to Allen wanting to apologize to Santa Ana and Matheny.

"We had good interaction," Krzyzewski told The Dan Patrick Show. "They were great. We felt good about that. It gave me more time to analyze everything, and that's when I came up with the decision this morning to do what we're doing."

After the technical, Allen went to the bench for the remainder of the first half, which Elon closed with an 11-2 run. He started the second half on the bench and returned to the game with about 16 minutes remaining, finishing the night with three points.

"That's a bad thing that he did tonight," Krzyzewski said. "But the fact that then we had to be distracted by it all and his team, that added to it, and that's what he's really down about. He can't believe that he did that. For him, he would die for his team. Here, he let his team down tonight. That's a big punishment for him, and he knows it.

"These things happen, and I'm responsible for that kid. I love that kid. A lot of crap has happened to him, and a lot of bad shots at him. That doesn't mean it's right for you to try and get back. Don't pay attention to it, but pay attention to the fact that you did something wrong and you let your team down."

Krzyzewski, who said Thursday he didn't see Allen's immediate reaction on the bench until watching tape after the game, said he wouldn't have had Allen return to the game in the second half if he had seen how emotional the guard had become.

"Yeah, then I would have known even more that, emotionally, he was not ready," Krzyzewski told The Dan Patrick Show. "I didn't start him in the second half. Then when I saw him on the court, he looked like a ghost. I didn't realize the emotional thing he had gotten through, to the depth, until I saw it on tape. Obviously, if I would have seen that in person, then I would've done something different.

"I love Grayson. He's my brother," Jones said. "We've been to battle. We've won a [national] championship together. We won plenty of games together. So there's nothing really you can say.

"I just gave him a really big hug, told him, 'I love you.' That's all that was, and let the silence kind of fill the void. There's nothing really you can say about it."

Allen spoke to ESPN at length before the season and expressed remorse about the two tripping incidents a year ago: one onLouisville'sRay Spaldingon Feb. 8 and another onFlorida State'sXavier Rathan-Mayeson Feb. 25.

"I think ultimately, I just made a mistake -- two mistakes -- and they were big ones and mistakes I regret," Allen told ESPN. "Ultimately, I let my emotions get the most of me -- in the heat of the moment, you know, did something that's unacceptable and not something I'm proud of. I think I'm a lot more mature now."

After the incident against the Seminoles, the ACC said it would not suspend Allen, but it did reprimand the star Blue Devils player.

Krzyzewski, speaking after Wednesday's win, defended how he handled the incident.

"I handle things the way I handle them," he said. "I think I've handled this correctly, and moving forward, I will continue to handle it correctly. I don't need to satisfy what other people think I should do. I'm a teacher and a coach, and I'm responsible for that kid. I know him better than anybody, and so to think that it's the last thing that's said about this to him is wrong.

"Obviously, we will do more -- doesn't mean that you have to see it or anybody else has to see it -- but what he did tonight was right. That's what people do. They say they're sorry; they accept responsibility."

Allen had an opportunity to leave Duke after last season. Multiple NBA executives told ESPN that Allen would have been a first-round pick in the draft, but he decided to return to school for a variety of reasons. He said education was important, he wanted another opportunity to win a national title and he wanted a chance to play some point guard.

ESPN's Jeff Goodman, Andy Katz and the Associated Press contributed to this report. 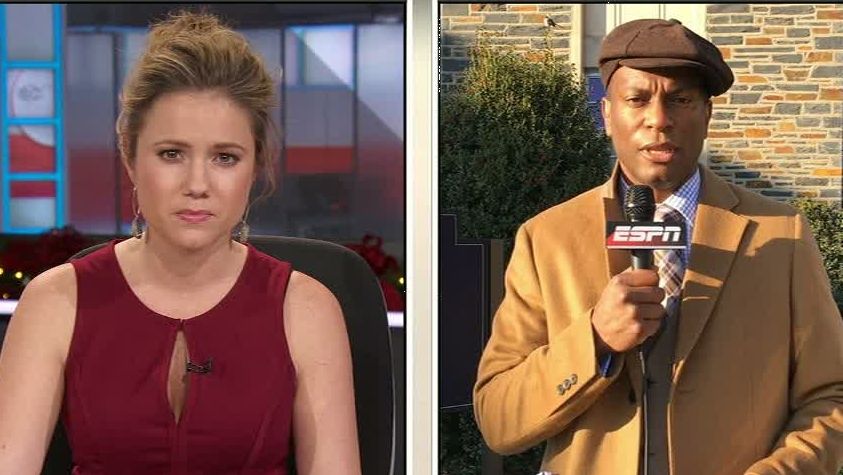