Dwyane Wade on Bulls teammates: 'I don't know that they care enough' 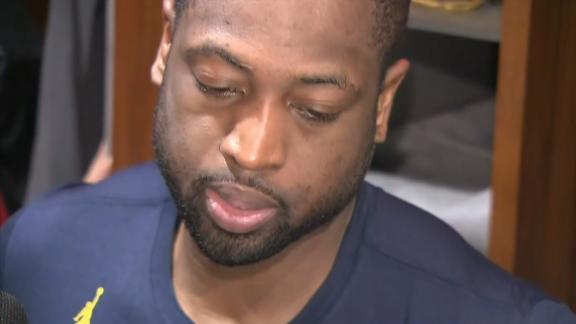 CHICAGO -- Bulls stars Dwyane Wade and Jimmy Butler ripped into their team Wednesday night after a 119-114 loss in which they led the Atlanta Hawks by 10 points with 3 minutes left but unraveled down the stretch.

Wade and Butler combined for 73 points, but Chicago still fell to 23-24on the season. Asked whether this loss was debilitating to the Bulls, Wade said he wasn't sure.

The Bulls have had the same issues all season. Aside from Wade and Butler, and to a lesser extent veterans Taj Gibson and Robin Lopez, the team isn't sure who is going to play with consistency from night to night.

Wade was asked whether the larger issues were due to a lack of attention on game days or practice days.

"I don't know. Pick," he said. "But at the end of the day, you just got to want more for yourself. It's a team game, but it's what you bring individually to the team. You play a good game, you play a bad game, it's how you go down and look at the film. It's how you look at the other opponents and see what you're doing, what you can take away from it.

"This game is more than just shot makes and misses. I don't know. Guys have to answer that question themselves. I'm not at home with people, but I don't know if I see enough guys who really, really want it. As long as it's like this, it has to hurt them.

"I'm 35 years old, man. I've got three championships. It shouldn't hurt me more than it hurts these young guys. They have to want it. If they don't want it, then we'll show up and play Friday. Hopefully we win; if we don't, we [do it] again. Keep it going until the season's over. It has to change. It has to hurt inside to lose games like this. This s--- should f---ing hurt."

"M-----f-----s just got to care if we win or lose," Butler said. "At the end of the day, do whatever it takes to help the team win. You play your role to the tee. Be a star in your role, man. That's how you win in this league, man. You have to embrace what this team, what this organization needs for you to do on either end of the floor.

Both Butler and Wade are hopeful that Wednesday's loss lights a fire under the rest of their teammates. But they aren't sure if it will.

"If you're not pissed off that you lost, man, something is wrong," Butler said. "This is your job. This is what you're supposed to love to do, and I don't think that everybody looks at it that way.

"I want to play with guys that care, guys that play hard, that want to do well for this organization, that want to win games, man. Do whatever it takes, just win. Who cares who is shining? When we're winning, everybody looks great, everybody is doing what they're supposed to do. I don't think that's happening right now, I really don't."

Wade was asked whether he felt there was too much pressure on himself and Butler.

Wade said he doesn't believe this is strictly a talent issue for his new group.

"There's other things that help you become a good player, a solid player. A team that people can count on. A player that a team can count on. You guys see our lineup. There's a lot of shuffling around. Coach don't feel you can count [on] that many guys right now. That can't be. I know there's guys over here waiting for their opportunities, but hopefully when they get them, they step and do their job that needs to be done."