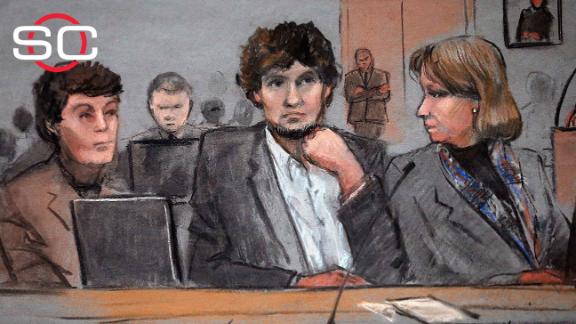 BOSTON -- After slouching through his trial for months with a bored look on his face, the defendant was ordered to rise.

For close to half an hour, Boston Marathon bomber Dzhokhar Tsarnaev was on his feet, fidgeting as he listened to the reading of a 24-page worksheet in which a jury dismantled, piece by piece, any hope he had of mercy.

By page 21, his fate was clear: death by injection.

In the nation's most closely watched terrorism trial since the Oklahoma City bombing, the 21-year-old Tsarnaev was sentenced Friday to death by a federal jury that swept aside arguments he was just a "kid" who fell under the influence of his fanatical older brother.

The decision -- which came just over two years after the April 15, 2013, bombing that killed three people and wounded more than 260 -- brought relief and grim satisfaction to many in Boston.

"We can breathe again," said Karen Brassard, who suffered shrapnel wounds on her legs.

The death sentence sets the stage for what could be the nation's first execution of a terrorist in the post-9/11 era, though the case is likely to go through years of appeals.

In the meantime, Tsarnaev will probably be sent to death row at the federal prison in Terre Haute, Indiana, where Oklahoma City bomber Timothy McVeigh was put to death in 2001.

A somber-looking Tsarnaev stood with his hands folded and head slightly bowed as he learned his fate, sealed after 14 hours of deliberations over three days. His lawyers left court without comment.

His father, Anzor Tsarnaev, reached by phone in the Russian region of Dagestan, let out a deep moan upon hearing the news and hung up.

The 12-member federal jury had to be unanimous for Tsarnaev to get the death penalty. Otherwise, the former college student would have automatically received life in prison with no chance of parole.

In weighing the arguments for and against death, the jurors decided among other things that Tsarnaev showed a lack of remorse. And they emphatically rejected the defense's central argument -- that he was led down the path to terrorism by his big brother.

"Today the jury has spoken. Dzhokhar Tsarnaev will pay for his crimes with his life," U.S. Attorney Carmen Ortiz said.

The attack and ensuing manhunt paralyzed the city for days and cast a pall over the marathon -- normally one of Boston's proudest, most exciting moments -- that has yet to be lifted. With Friday's decision, community leaders and others talked of closure, of resilience, of the city's Boston Strong spirit.

"Today, more than ever, we know that Boston is a city of hope, strength and resilience that can overcome any challenge," Mayor Marty Walsh said.

Tsarnaev was convicted last month of all 30 charges against him, including use of a weapon of mass destruction, for joining his now-dead brother Tamerlan in setting off two shrapnel-packed pressure-cooker bombs near the finish line of the race. Tsarnaev was also found guilty in the killing of an MIT police officer during the getaway.

Seventeen of the charges carried the possibility of a death sentence; ultimately, the jury gave him the death penalty on six of those counts.

Tsarnaev's chief lawyer, death penalty specialist Judy Clarke, admitted at the very start of the trial that he participated in the bombings.

But Clarke argued that Dzhokhar was an impressionable 19-year-old led astray by his domineering 26-year-old brother, Tamerlan. The defense portrayed Tamerlan as the mastermind of the plot to punish the U.S. for its wars in Muslim countries.

Tamerlan died days after the bombing when he was shot by police and run over by Dzhokhar during a chaotic getaway attempt.

Prosecutors depicted Dzhokhar as an equal partner in the attack, saying he was so coldhearted he planted a bomb on the pavement behind a group of children, killing an 8-year-old boy.

To drive home their point, prosecutors cited the message Tsarnaev scrawled in the dry-docked boat where he was captured: "Stop killing our innocent people and we will stop." And they opened their case in the penalty phase with a startling photo of him giving the finger to a security camera in his jail cell months after his arrest.

The jurors also heard grisly and heartbreaking testimony from numerous bombing survivors, who described seeing their legs blown off or watching someone next to them die.

Killed in the bombing were Lingzi Lu, a 23-year-old Boston University graduate student from China; Krystle Campbell, a 29-year-old restaurant manager; and 8-year-old Martin Richard, who had gone to watch the marathon with his family. Massachusetts Institute of Technology police Officer Sean Collier was gunned down in his cruiser days later. Seventeen people lost legs in the bombings.

The speed with which the jury reached a decision surprised some, given that the jurors had to fill out a detailed worksheet in which they tallied up the factors for and against the death penalty.

The jury agreed with the prosecution on 11 of the 12 aggravating factors cited, including the cruelty of the crime, the extent of the carnage, the killing of a child and Tsarnaev's lack of remorse.

In weighing the mitigating factors, only three of the 12 jurors found that Tsarnaev acted under the influence of his brother.

"Now he will go away and we will be able to move on. Justice. In his own words, 'an eye for an eye,''' said bombing victim Sydney Corcoran, who nearly bled to death and whose mother lost both legs.

Tsarnaev did manage to escape a death sentence in the killing of the MIT officer, after prosecutors admitted they do not know which brother pulled the trigger.

Tsarnaev did not take the stand at his trial and showed a trace of emotion only once, when he cried while his Russian aunt was on the stand.

The only evidence of any remorse on his part came from the defense's final witness, Sister Helen Prejean, the Roman Catholic nun and death penalty opponent portrayed in the movie "Dead Man Walking." She quoted Tsarnaev as saying of the victims: "No one deserves to suffer like they did."

Tsarnaev's lawyers also called teachers, friends and Russian relatives, who described him as a sweet and kind boy who cried during "The Lion King."

The defense also argued that sending Tsarnaev to the high-security Supermax prison in Colorado for the rest of his life would be a sufficiently harsh punishment and would help the victims move on without having to read about years of death row appeals.

The outcome of the penalty phase was wrapped in high suspense.

Massachusetts is a liberal, staunchly anti-death penalty state that hasn't executed anyone since 1947, and there were fears that a death sentence for Tsarnaev would satisfy his desire for martyrdom. Even the grieving parents of Martin Richard publicly urged prosecutors to drop their push for death.

But others argued that if capital punishment is to be reserved for "the worst of the worst," Tsarnaev qualifies.

U.S. District Judge George O'Toole Jr. will formally impose the sentence at a later date during a hearing in which bombing victims and Tsarnaev will be given the opportunity to speak.

The Tsarnaevs, ethnic Chechens, lived in the former Soviet republic of Kyrgyzstan and the volatile Dagestan region, near Chechnya, before moving to the U.S. about a decade before the bombings. They settled in Cambridge, just outside Boston.