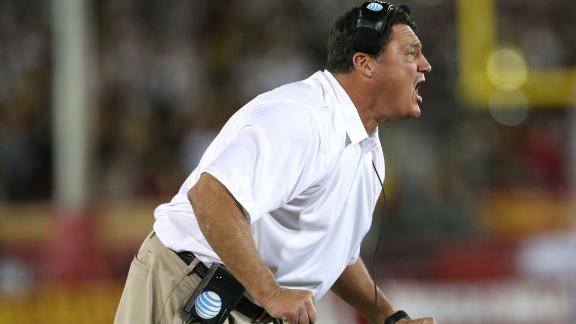 Orgeron was out of college football last season after he led USC to a 6-2 record following the firing of then-coach Lane Kiffin in 2013. Ultimately the Trojans hired Steve Sarkisian, who finished the 2014 season with a 9-4 record, including a bowl win overNebraska.

In October, Orgeron told ESPN's Chris Low that "everything happens for a reason, but I can tell you that I'm more ready than I've ever been to go back."

Orgeron had previously indicated that he was interested in being a head coach again, going so far as to lobby for the vacant job atKansas.

"Ed is an expert when it comes to the defensive line," Miles said in a statement. "He will bring tremendous enthusiasm and energy to our program. His passion and love for the state of Louisiana makes him a great fit for us.

"Ed has done a great job at every coaching stop he's made. His teams are always well prepared, played hard on every snap and fed off the enthusiasm and excitement that he brought to the field. This is a great hire for us and we are really excited about Coach O becoming a Tiger."

Orgeron, who was head coach at Ole Miss from 2005 to 2007, served as an assistant with theNew Orleans Saintsand theTennessee Volunteersbefore following Kiffin to USC, where he was defensive line coach.

The 53-year-old Louisiana native is highly regarded as a recruiter and knows the state well from his time atMcNeese StateandNorthwestern State.

He replaces Brick Haley, who had been at LSU for six years.