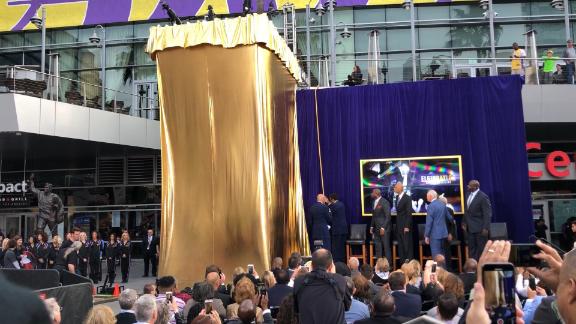 LOS ANGELES -- The Los Angeles Lakers unveiled a bronze statue of Elgin Baylor in the middle of Staples Center's Star Plaza before Friday night's game against the Minnesota Timberwolves.

"Before there was Dr. J [Julius Erving] and a guy named Michael Jordan, there was Elgin Baylor," Magic Johnson said in the tribute.

"Chick Hearn said he was better than anybody he had ever seen," James Worthy said in the tribute.

"He was unique. He helped build basketball here. The Lakers wouldn't be the Lakers without him," Jerry West said in the tribute.

"Rumor has it that the Minneapolis Lakers, had they not been able to get Elgin, they may have gone under," said Lantz, who moderated the ceremony. "In essence, Elgin kind of saved the Lakers. That's some of the reasons why we're here today."

Bryant, who was unable to attend the ceremony, paid homage to Baylor with a separate minute-long video.

After the video tribute, West, Johnson, Abdul-Jabbar, O'Neal and legendary musician Bill Withers each gave speeches about Baylor on the dais, while various former Lakers attended the ceremony in the crowd, including Worthy, Wilkes, Michael Cooper and former Lakers player and general manager Mitch Kupchak.

West, who was teammates with Baylor for 12 seasons, was the most emotional speaker, tearing up at several points and bestowing the highest possible praise on Baylor.

"This is one of the greatest men I've ever met in my life," West said.

Following West's speech, the Lakers unveiled the 2,300-pound, nearly 16-foot-9 statue. The statue was created by artists Omri Amrany and Gary Tillery, both of the Fine Art Studio of Rotblatt-Amrany.

"I certainly appreciate all the wonderful things people have said about me," Baylor said. "But without the wonderful teammates, [this] certainly wouldn't have been possible. I'd just like to thank my teammates."

Baylor was the first player to score 70 points in a game, getting 71 against the New York Knicks on Nov. 15, 1960. Baylor holds the all-time single-game Finals scoring record with 61 points against the Boston Celtics.