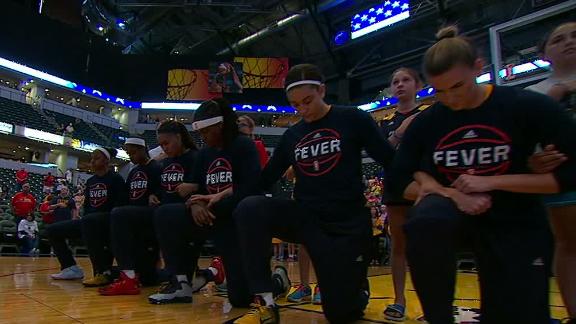 INDIANAPOLIS -- During the playing of the national anthem, the entire Indiana Fever team knelt and locked arms Wednesday night, while two players on the Phoenix Mercury also knelt before the teams' first-round game in the WNBA playoffs.

The two Mercury players who knelt were Mistie Bass and Kelsey Bone; the rest of the Phoenix players remained standing, as did the coaching staffs of both teams.

Athletes from around the nation have joined in kneeling during the anthem at various sports events as part of a protest movement started bySan Francisco 49ers quarterback Colin Kaepernick.

Tamika Catchings, who played the final game of her career in the Fever's 89-78 loss to the Mercury, reached out to her teammates on Tuesday to ask them what they thought about kneeling during the anthem.

"It was unanimous that we were going to do it together," Fever player Marissa Coleman said. "We have a platform, and I think it's a disservice if we don't use it. This was bigger than basketball. As important as this game was, there are other things going on in this world. It's just to get conversations started."

Fever coach Stephanie White did not kneel during the anthem, but she fully supported her players' decision.

"The first thing she said to us in the huddle before the game started was how proud she was of us for doing it," Coleman said. "I'm proud to be part of this organization."

Phoenix's Diana Taurasi did not kneel but said that should not be taken as a sign that she didn't support those who did.

"Whether you kneel or stand, everyone is against injustice and people being discriminated against and being killed," Taurasi said. "Those are things as a society we have to get better at."

Bass and Indiana's Briann January were among the most outspoken players in the league earlier this year during a controversy when WNBA players were initially fined for wearing T-shirts during warm-ups that supported the Black Lives Matter movement. The fines were later rescinded.

Bass said she did not want the players' actions on Wednesday to be seen as disrespectful to police or the military.

"I have the utmost respect for the amazing police officers who keep the integrity of their job and are upholding what they swore to do, which is to protect and serve," Bass said. "As well as all the people overseas who serve and protect us. However, the bad apples are making it a bad situation for all those who are good."

There didn't seem to be much of an audible or visible reaction from the crowd at Bankers Life Fieldhouse to the WNBA players kneeling.

"I have no negative feelings about it at all; I respect the players," said Carla Wise, an Indianapolis resident who has had season tickets for the Fever since the franchise began in 2000. "I respect that it's addressing an issue we have in society. I think it's a very peaceful and respectful way to call attention to something that needs to be addressed."

Wise is white; she was at the game with friends who were white and black.

"The fans that I speak to, and the ones I sit around, I think most of them would be in support," Wise said. "Again, it's a peaceful thing they're doing. I think most fans would be appreciative of that. Certainly not everyone, but individuals I talk to respect what the players are doing."

Renee Brown, the WNBA's chief of basketball operations, was in attendance on Wednesday to present the Kim Perrot Sportsmanship Award to Catchings. Brown did not address the subject of the players' actions, but the league released a statement from WNBA president Lisa Borders.

"I support our players expressing their views on important social issues," Borders said. "Standing for an anthem is a sign of respect and a demonstration of unity across many cultures throughout the world.

"The call to action is for all of us to invest time and resources to help rebuild and strengthen our communities. And we have been actively working with the players on this next impactful effort."