Eric Berry makes emotional return to the field against Cardinals 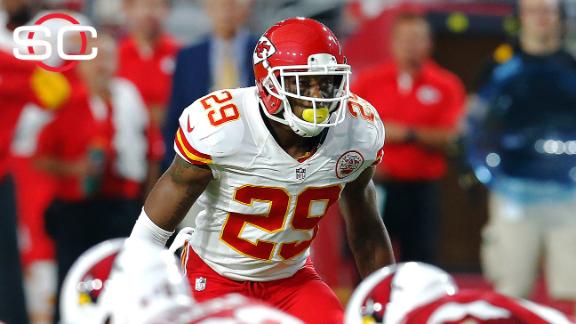 Eric Berry didn't want to dismiss the importance of getting back to football, but he found upon his return to the Kansas City Chiefs that he also missed the things that surround the game. The smell of the grass. The camaraderie with his teammates in the locker room beforehand. The sounds of the crowd.

Berry got to experience all of that again on Saturday night before the Chiefs' preseason opener against the Arizona Cardinals in Glendale, Arizona.

Just thinking about it all moved Berry to tears on the flight from Kansas City to Phoenix on Friday.

"It just all hit me," said Berry, who in November was diagnosed with Hodgkin's lymphoma. "I don't think anyone can really understand the road I took, the sacrifices I had to make, the feelings I had going through those times, just to be able to experience the things I mentioned to you at the beginning. You take the little things, and you appreciate everything about the game and everything that surrounds the game. It's a blessing to be out here, and I'm going to take full advantage of the opportunity I have."

Berry arrived at the University of Phoenix Stadium playing field before the game to be greeted by his mother, Carol. The two shared an emotional hug.

"That's something we talked about when I was laying in the hospital bed or I was in her room at 4 o'clock in the morning and she was just telling me everything would be OK because I couldn't stop crying," Berry said. "She comforted me at a time when I needed comforting. She was very strong.

"Just being able to do it and be out with my teammates and have my mom on the sideline, that was just great. She was there from day one. We went through a lot. She saw me at my worst. We talked about this moment. I think that's why she came to tears like that because we talked about it a long time ago. I told her I'd be back."

But Berry indicated he realized his return to football was important to people beyond himself, his family and the Chiefs.

"I've been running into a lot of people, people that don't even know about football telling me their cousin just got diagnosed with cancer or their mother or their aunt, and they just tell me they have hope because they see me out on the field. That means a lot to me.

"I've got to take advantage of this opportunity because it's bigger than football. ... It's just amazing seeing how everybody else gets so much hope just from seeing me strap on the pads even before I could get on the field. Just to see me practice and see me out there on the team does so much for them. So I've got to go hard. I've got to give everything I've got."

After sharing the hug with his mother, Berry went to midfield for the pregame coin toss as one of the Chiefs' captains. He entered the game on the fourth play from scrimmage when the Chiefs went to their nickel defense. The Cardinals completed a 57-yard pass on the play, though Berry was not involved.

Berry later played a series at safety when the Chiefs went to their nickel defense. He wasn't credited with any tackles or assists in the Chiefs' 34-19 win.

Doctors discovered a mass in Berry's chest shortly after the Chiefs' Nov. 20 game at the Oakland Raiders last year. Days later, he was diagnosed with lymphoma and soon after began chemotherapy treatment.

Berry finished his treatment in May and was declared cancer-free by his doctors a month later. Berry was cleared to practice and play by the Chiefs in late July, the day before they began a three-day minicamp for rookies, quarterbacks and players coming off injury or illness.

The Chiefs withheld Berry from contact during their first couple of training camp practices in pads, but they lifted his restrictions on physical play.