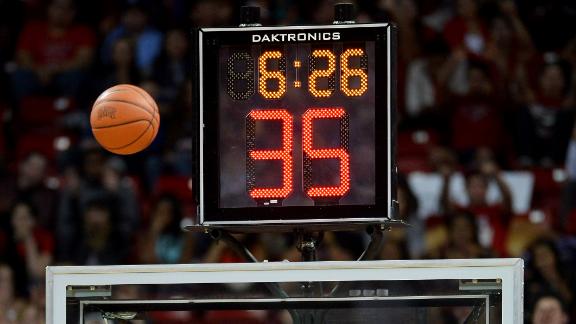 Nearly 60 percent of the nearly 500 college coaches polled by ESPN are in favor of the men's basketball shot clock changing from 35 seconds to 30 seconds.

"The shot clock would be fine if they put it to 30," Kentuckycoach John Calipari said. "It would have no effect on me."

Of 460 Division I coaches polled by ESPN on the topic, 270 (59 percent) said they would prefer the shot clock to shorten to 30 seconds. Thirty percent said they would rather it remain at 35 seconds, and 10 percent were in favor of it being changed to 24 seconds -- which is also what is used in NBA and international play.

The remaining 1 percent was made up of coaches who wanted the clock set at 28 seconds or 45 seconds.

"I think we should all have a 24-second shot,"Villanovacoach Jay Wright told ESPN. "Consistent. It's NBA and international. We should all learn to play the game the same way. The game is still the game. Everything you do to the game, everyone's adjusted."

We are only country that doesn't have 24 seconds," Central FloridaassistantTim Thomas added. "There are [15-year-olds] in FIBA competition all over the world that are able to play with a 24-second shot clock. But we can't?"

The Men's Basketball Rules Committee will meet from May 13-15 at the NCAA headquarters in Indianapolis, and it could pass a recommendation for the shot clock to be changed. If that occurs, it would also need approval from the Playing Rules Oversight Panel on June 24.