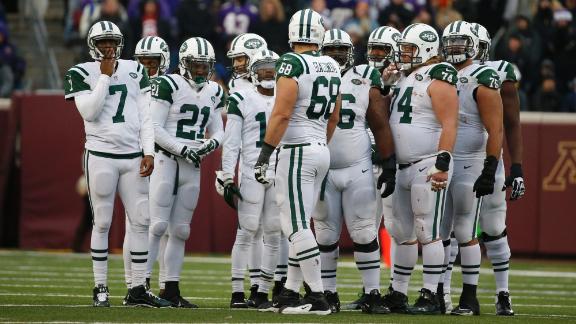 FLORHAM PARK, N.J. -- The New York Jets haven't made a lot of big plays through the air, but they make headlines because of what has occurred in the air space.

For the second time in six weeks, the Jets practiced Wednesday as a plane circled the field carrying a banner that urged the firing of general manager John Idzik.

A disgruntled fan group, which has its own website, rented a plane that flew over practice during the media period. The banner read:

The group, which already has purchased billboard space near MetLife Stadium, is planning to distribute approximately 10,000 "Fire Idzik" flags at Sunday's final home game against the New England Patriots.

Flags already have been handed out at local bars.

Several players looked up during their special teams drills as the plane buzzed over the field in suburban New Jersey. Unlike the Nov. 5 flyover, Idzik and owner Woody Johnson weren't present.

Idzik, in his second year, has come under intense criticism for the Jets' 3-11 season. Coach Rex Ryan is expected to be fired, and there's growing speculation Idzik could be dismissed as well.

Johnson expressed his frustration with the season in a recent interview, but he has yet to reveal his plans.

He unwittingly fueled the firestorm by committing a mishap on Twitter. Johnson mistakenly favorited a tweet urging him to fire Idzik, prompting a mea culpa Tuesday night from the owner.

It was in response to this tweet: "@woodyjohnson4 you really need to #FireIdzik at this point. This roster is garbagio."