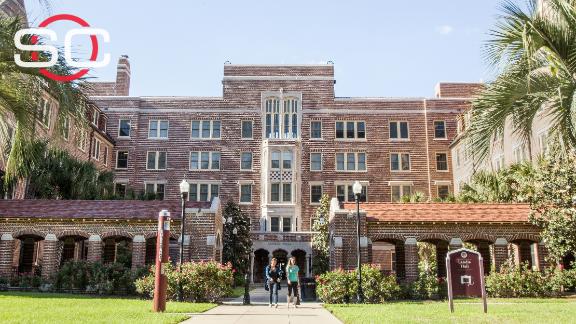 Florida State has settled a federal Title IX lawsuit with the former student who alleged that former Seminoles quarterback Jameis Winston sexually assaulted her in December 2012.

The school will pay $950,000, which attorneys for accuser Erica Kinsman say is the largest payment ever to a single plaintiff claiming a school's indifference to a sexual assault allegation. The settlement agreement says Kinsman will receive $250,000 and her attorneys will get $700,000, though the agreement notes that might not be the actual split of the total settlement.

Kinsman attorney John Clune said his client will receive more than $250,000 and added that FSU is using that breakdown to justify its payment.

Kinsmansaid she was drunk at a Tallahassee, Florida, bar in December 2012 when Winston and others took her to an apartment, where she says the quarterback raped her.Winstonhas said the two had consensual sex.

In January 2015, Kinsman filed a Title IX lawsuit alleging that Florida State violated federal law when school officials showed a "deliberate indifference" to her allegation. She claimed the school fostered a "hostile educational environment" and refused to investigate her allegation as federal Title IX laws dictate. She left the university after the allegation became public in November 2013.

"I will always be disappointed that I had to leave the school I dreamed of attending since I was little," Kinsman said in a statement. "I am happy that FSU has committed to continue making changes in order to ensure a safer environment for all students."

Kinsman filed a civil suit against Winston, who filed a countersuit. She also told her story publicly in a documentary.

"FSU's choice to settle in no way compromises our commitment to fight for Jameis Winston and to clear the outrageous -- and false -- allegations against him," Winston attorney Mayanne Downs said in a statement. "We very much look forward to asking Ms. Kinsman questions while she's sworn to tell the truth."

The Florida State case was scheduled to begin in July 2016 in U.S. District Court for the Northern District of Florida after a judge denied Florida State's motion to dismiss the lawsuit in August 2015.

Kinsman's settlement is separate from the investigation the Office for Civil Rights within the U.S. Department of Education began in April 2014.

"The OCR has the ability to take a very close look at how the school has done on handling a number of cases over the past several years, a much broader review than we can do," Clune said. "We're hopeful once they identify broader problems that they'll be able to install additional changes and hopefully monitor university compliance."

Senior associate athletic director Monk Bonasorte and football coach Jimbo Fisher became aware of Kinsman's allegation against Winston in January 2013, but the university maintains that an appropriate person to open a school investigation was never made aware. The lawsuitalleged that the athletics department and Fisher deliberately withheld the allegation from the school's Title IX coordinator and Office of Student Rights and Responsibilities.

"Although we regret we will never be able to tell our full story in court, it is apparent that a trial many months from now would have left FSU fighting over the past, rather than looking toward its very bright future," Thrasher said in a statement. "We have decided to instead move forward, even though we have full faith that the ultimate outcome of a trial would have been consistent with the previous law enforcement investigations and retired Supreme Court Justice Major Harding's findings in the student conduct hearing."

The university's defense fees totaled $1.7 million, of which Seminole Boosters Inc. paid $1.28 million, as part of the supplemental funding the organization provides to Florida State, according to a letter to the group obtained by ESPN's Darren Rovell.

The letter, sent to Seminole Boosters by group chairman David Rancourt, also noted that the $950,000 settlement was paid by the State of Florida's Risk Management Fund. That means the total cost of the suit to the university and the state was more than $2.6 million.

"No. 1, she wanted to hold FSU accountable, and it has happened both publicly and financially, and the other is to have an impact on FSU's campus and make it a safer place for female students," Clune said. "She thinks [Florida State's initiative] is a good start, but there is definitely more work to be done. They're on the path."

Information from ESPN senior writer Mark Schlabach and The Associated Press contributed to this report.