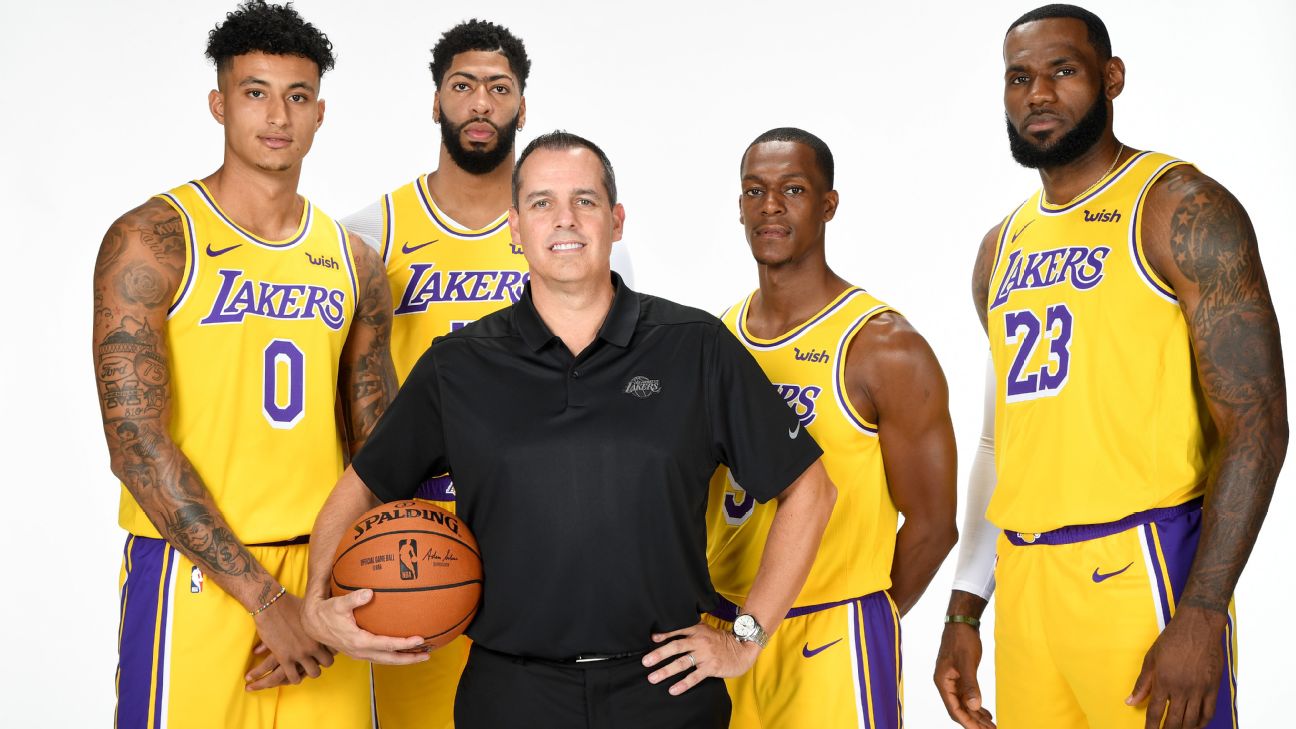 EL SEGUNDO, Calif. -- Bodies bounced off one another during an intrasquad scrimmage that capped theLos Angeles Lakers' first practice of training camp Saturday.

LeBron James collided with Alex Caruso, causing both of them to fall to the floor. Anthony Davis and Dwight Howard got tangled up going for a rebound, and the pair hit the hardwood.

It was just what first-year Lakers coach Frank Vogel wanted to see.

Vogel, whose Indiana Pacers teams were a perennial playoff force thanks to their defensive prowess, wanted to set the tone with his new group on that end of the floor. He dedicated nearly an hour of the first practice to on-the-ball defensive drills and principles.

"He's a defensive coach and wants to have a defensive mindset," Davis said of Vogel. "We're going to be a defensive team. We made sure we covered a lot of defensive schemes today."

Vogel said that Howard, a three-time NBA Defensive Player of the Year award winner, was particularly physical as he played with reserves against a first five of James, Davis, Danny Green, Rajon Rondo and JaVale McGee -- a lineup that Vogel was testing out together.

"I'm preaching 'play physical' -- he probably overdid it a little bit," Vogel said when asked about Howard. "You know, he's knocking guys around. Look, you got to deal with that."

James missed nearly all of training camp at the outset of the 2017-18 season -- his last with the Cleveland Cavaliers -- after turning an ankle during a scrimmage when he landed on Cedi Osman's foot. He said his collision with Caruso -- which temporarily paused practice as teammates scrambled over to help both players up -- wasn't a cause for concern.

"It was a different situation," James said. "I didn't have any flashbacks. [Just] two guys colliding and hitting the floor."

Vogel said he had only one thing enter his mind when he saw his guys take a tumble: "Are they getting up?"

In other words, a few bumps and bruises are to be expected.

"I love guys hitting the floor," Vogel continued. "We're not playing hard enough if we're not doing that, but obviously you don't want to see anybody getting hurt."

Davis said they know how to toe the line.

"Obviously, you're not going to try to injure anyone or do anything stupid," he said. "We know we have to play with physicality. We did a good job doing that today. So in a way, that makes it a lot easier against our opponent."

After a major roster overhaul and a coaching-staff change in the offseason, Vogel is prioritizing defense all the same.

"You know, we got a lot of firepower offensively," he said. "But establish that defensive mindset of playing hard and playing tenacious and being physical. And on offense, just beginning to get organized and talking about the importance of playing for each other."

It was a mere glimpse of the group together, but Davis was satisfied with the approach.

"I like the dynamic of the team," Davis said. "Everybody is playing physical and playing hard and coming in with the mindset of being professional and doing what we have to do to reach our goals.

"It was a good first practice." 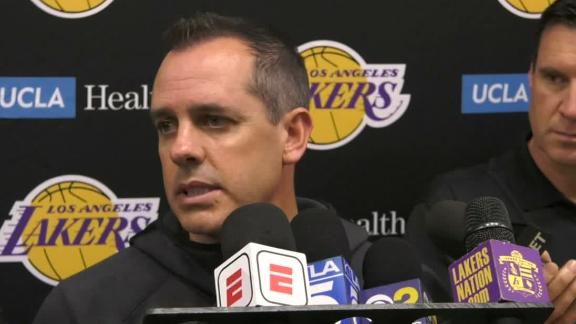 Vogel says Lakers' D can be as good as they want it to be
Lakers head coach Frank Vogel describes the early focus in practice on defense and how the team has to talent to be elite on that end.
Report a correction or typo
Related topics:
sportsespnnbalos angeles lakers
Copyright © 2021 ESPN Internet Ventures. All rights reserved.
More Videos
From CNN Newsource affiliates
TOP STORIES