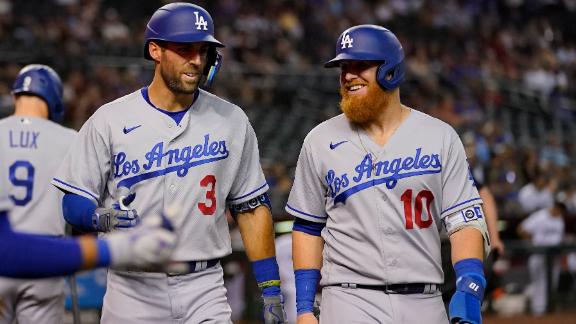 PHOENIX -- - Freddie Freeman's swing looked good and the baseball jumped off his bat, carrying deep into right-center field. The veteran slugger had hit 274 homers in his career prior to that at-bat and this one certainly felt like No. 275.

Then again, it had been so long since he'd rounded the bases in a slow trot, he wasn't quite sure.


"I haven't hit one in a while, so I didn't know," Freeman said grinning. "Maybe that opens the floodgates."

Freeman's three-run blast for his first long ball in more than a month highlighted a five-RBI, four-hit performance as the Los Angeles Dodgers clobbered the Arizona Diamondbacks 14-1 on Thursday night.

The Dodgers got off to a quick start with back-to-back doubles in the first from leadoff hitter Mookie Betts and Freeman. Two batters later, Will Smith's single up the middle scored Freeman for a 2-0 lead.

It was the start of a 24-hit barrage, the Dodgers' most since getting 24 against the San Francisco Giants on Sept. 13, 2014. Every player in the starting lineup had at least two hits.

Chris Taylor had a two-run homer in the eighth for the Dodgers' 20th hit of the night.

"These are the kind of nights where you sit back and smile," Freeman said. "These don't happen very often."

The big blow came in the second, when Freeman drove a slider from Humberto Castellanos over the right-center wall to push the Dodgers ahead 6-0. The first baseman's had a good start with his new team after signing a $162 million, six-year deal during the offseason - with a batting average hovering around .300 - but it was his first homer since April 24.

Freeman also hit another double in the sixth to dead center that hit the wall and scored Betts.


By the end of the evening, both teams had position players on the mound. Infielder Jake Hager threw the ninth for the D-backs while the Dodgers countered with their own infielder in Hanser Alberto.

Los Angeles won for the 10th time in 12 games. The Dodgers also became the second team in the big leagues with 30 wins, joining the Yankees.

Arizona couldn't climb out of the sizable early hole. Castellanos (3-2) was tagged for six runs over four innings, giving up 10 hits and a walk while striking out one.

The D-backs scored their only run in the sixth when Christian Walker hit his 12th homer of the year.

L.A.'s Mitch White started his second game of the season and threw four shutout innings. Justin Bruihl (1-1) got the win after a scoreless inning of relief.

The Dodgers announced they will retire Gil Hodges' No. 14 on June 4 when they host the New York Mets.


Hodges was a key member of the Dodgers when they won the World Series in both 1955 and 1959. He was recently elected to the Hall of Fame by the Veterans Committee after an 18-year playing career that included eight All-Star selections and three Gold Gloves.

Hodges also has plenty of history with the Mets, most notably as manager for the "Miracle Mets" who won the 1969 World Series.

Dodgers: Manager Dave Roberts said Max Muncy's left elbow has been bothering him over the past several days and didn't rule out a potential trip to the injured list. ... Roberts also said LHP Clayton Kershaw (inflammation in a pelvic joint) played catch Wednesday and is scheduled for a bullpen next week.

The two teams meet again on Friday night. The D-backs send LHP Madison Bumgarner (2-2, 2.76) to the mound. The Dodgers will counter with RHP Ryan Pepiot (0-0, 3.86), who will be making his third MLB start.