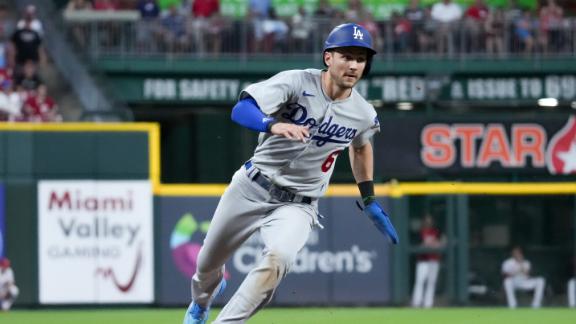 CINCINNATI -- - Freddie Freeman homered and drove in two runs and the Los Angeles Dodgers extended their winning streak against Cincinnati this season to six games, beating the Reds 8-4 on Wednesday night.

Freeman, who tied a season high with five RBI in an 8-2 win in series opener on Tuesday, has seven RBI in the series.


"We backed up a really good offensive output performance with another one," Dodgers manager Dave Roberts said. "Really good at-bats throughout the lineup. We have a superstar player out of the lineup. Up and down the lineup, guys are starting to pick up that void of Mookie."

Dodgers star Mookie Betts is sidelined after cracking a rib in a collision with Cody Bellinger last week.

Freeman said he is fully focused on the task at hand, and not ahead to the Dodgers' three-game series in Atlanta this weekend. He was part of the Braves' World Series title run last season.

"I've been around for a long time and concentrate on each game," Freeman said. "I know what's going on this weekend, but it doesn't really affect me."

Albert Almora Jr. hit his fifth homer of the season for Cincinnati, which has lost eight straight over two seasons to the Dodgers at Great American Ball Park.

Dodgers left-hander Tyler Anderson, who took a no-hitter into the ninth inning in his last start, allowed three earned runs on five hits in five innings.

"Today was one of those outings where it's just scrap everything and go into compete mode," Anderson said. "I felt fine physically. Just didn't feel real crisp."

Consecutive doubles by Kyle Farmer and Donovan Solano, who made his season and Reds debuts, put Cincinnati ahead 1-0 in the second inning. The Reds scored three runs in the second, one more than Anderson had allowed in 10 of 12 starts this season.


Freeman extended his hitting streak to five games with an RBI single in the fifth. The Dodgers grabbed a 4-3 lead in the inning on Chris Taylor's hit-by-pitch with the bases loaded and Justin Turner's sacrifice fly. It was Turner's 21st RBI in 53 games against Cincinnati.

Reds starter Luis Castillo, who was 3-0 with a 1.90 ERA in four career starts against the Dodgers, allowed four earned runs in five innings and hit two batters.

"Luis didn't have his best command but he gave us a chance to win against one of the best lineups in the league, If not the best," said Reds manager David Bell.

Taylor threw out Jonathan India at home trying to score the go-ahead run the fifth.

"CT made a heck of a throw," Roberts said. "He's been building up his arm all year."

Freeman's seventh homer of the season off Ross Detwiler (0-2) leading off the seventh put the Dodgers in front.

"I've faced Ross a lot in my career," Freeman said. "He's sinker-slider, and I was able to get to a sinker inside right there and get it over the fence."

Trayce Thompson' who was acquired Monday in a trade with the Tigers, snapped an 0-for-13 streak with a two-run double in the eighth to make the score 7-4.

The Dodgers selected the contract of OF Stefen Romero and placed INF Hanser Alberto on the paternity list. In order to make room for Romero on the 40-man roster, INF Edwin Ríos was transferred to the 60-day injured list. The 33-year-old Romero returned to the major leagues for the first time since 2016.