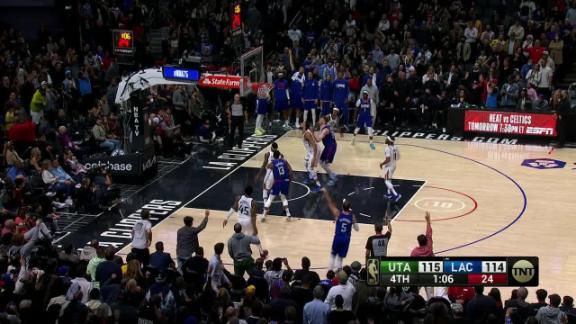 LOS ANGELES -- - Paul George scored 34 points in his return after missing three months and the Los Angeles Clippers rallied from a 25-point deficit to beat the Utah Jazz 121-115 on Tuesday night.

Reggie Jackson added 21 points for the Clippers, who snapped a five-game skid with a 39-point fourth quarter after trailing by 16 early in the period.


From there, the Clippers outscored Utah 34-12 to end the game. The Clippers took their first lead of the game, 110-109, on a jumper by Isaiah Hartenstein. During the spurt, George hit his sixth 3-pointer of the game.

The Clippers have had multiple comeback wins when trailing by at least 20 points this season.

Mitchell tried to call a timeout on the baseline with 10 seconds left, but the Jazz had none left. Jackson shot the technical foul and made it, putting the Clippers ahead by five.

The Jazz struggled at the line, making 17 of 29 free throws.


With George resting to start the fourth period, Robert Covington drilled a 3-pointer from in front of his bench that left the Clippers trailing 103-94. It was their first single-digit deficit since the opening quarter, when they were held to 14 points.

Utah led by 25 points early in the third on a basket by Rudy Gobert. George scored 20 points in the period, including 10 of their final 12 points to cut the deficit to 94-82 heading into the fourth.

Clippers: They've won once in three meetings with the Jazz this season.

Jazz: Host the Lakers on Thursday.