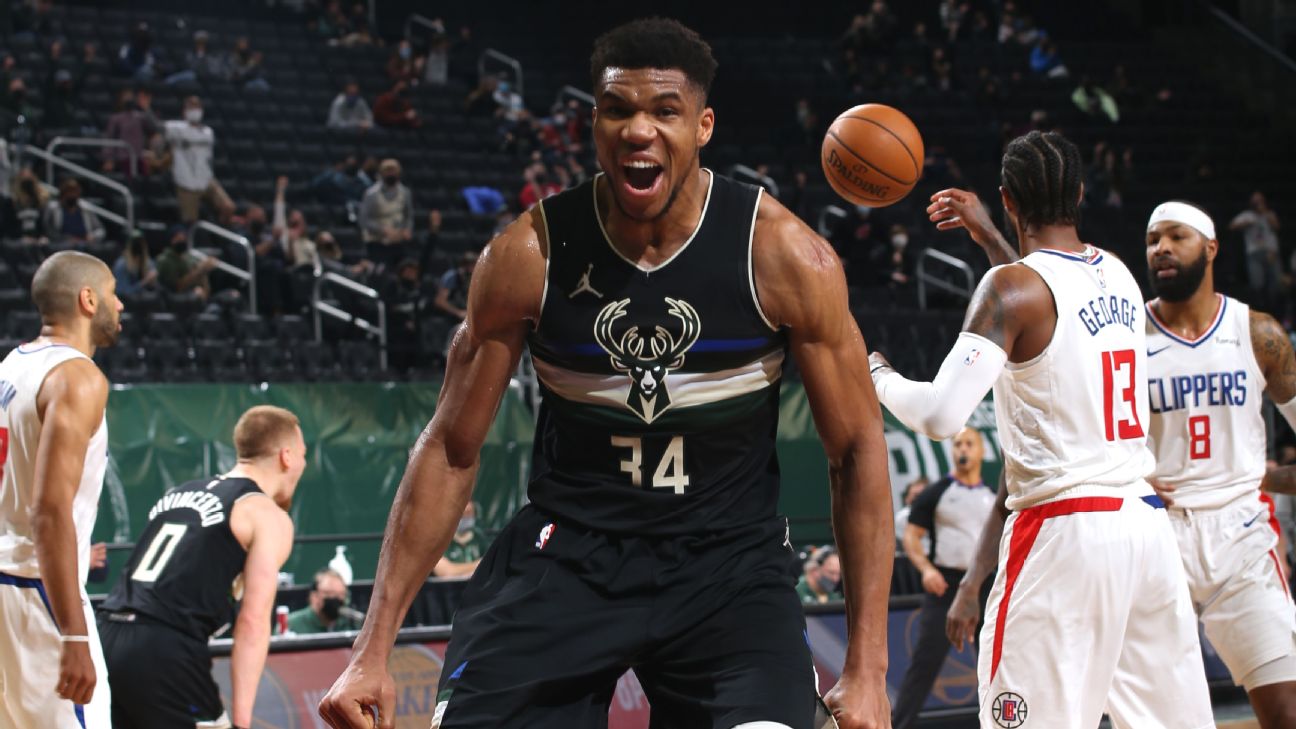 With 24 seconds left in a one-point game, the Milwaukee Bucks came out of a timeout and passed the ball five times, moving it around until it returned to Giannis Antetokounmpo's hands.

With the LA Clippers' defense in full scramble mode and leaving the paint as wide open as a runway, Antetokounmpo was cleared for takeoff, and the two-time reigning MVP threw down a massive slam that sent him galloping for joy with a smile as big as Lake Michigan.


Antetokounmpo's thunderous dunk was the exclamation point at the end of a brilliant performance that saw the Bucks star drop 36 points, 14 rebounds, 5 assists and 4 blocks on the Clippers to lead the Bucks to a 105-100 winon Sunday at Milwaukee's Fiserv Forum.

Even more impressive than that elite stat line was the way Antetokounmpo put the Clippers away, erasing a seven-point deficit by outscoring LA 17-10 by himself in the final 8 minutes, 30 seconds. He added two NBA Defensive Player of the Year-type blocks, as well, stuffing Ivica Zubac on a dunk attempt at the rim and getting a piece of a Kawhi Leonard fadeaway from behind on a help play.

"It was individual pride," Antetokounmpo said of joining teammate Khris Middleton in taking on the Clippers' All-Star duo of Leonard and Paul George. "It is pride. It is an ego thing. Personally, I love that going down the stretch.

The Clippers (24-12) came into this meeting against Antetokounmpo and the Bucks looking to show that they have improved since last season, when they lost both meetings to the Bucks, including an embarrassing 119-91 defeat in Milwaukee on Dec. 6, 2019.

During the final minutes on Sunday, the Clippers instead saw Milwaukee beat them in the same manner in which they strive to win games. The Bucks' best player competed like the MVP he is down the stretch. Their two best two-way players, Antetokounmpo and Middleton, took on the challenge of defending the opposing team's stars and got game-winning stops.

In the fourth quarter, Leonard and George combined to shoot 3-for-15 and scored a total of six points. After Leonard (25 points, 9 rebounds) scored on a 13-foot jumper with 4:01 left, he and George missed the Clippers' final nine shots over the final 3:23.

On the Clippers' last three possessions in which they trailed by three points or less, they passed just once on missed 3-point attempts by Leonard and George, who finished with 16 points, 7 assists and 7 rebounds but was just 2-for-10 on 3-point attempts.


When the Clippers have been at their best this season, they have moved the ball like it's a pinball, passing up good shots for even better shots. But in losses to title contenders in theBrooklyn Netsand now Milwaukee, the Clippers got away from passing down the stretch and had to rely on their two stars trying to create and match opposing stars in crunch time.

"As a team, I don't feel like we're there yet," said Leonard, who remains positive about the Clippers building toward where they want to be. "We're looking to the sideline for plays. I feel like our pace has pretty much slowed down.

"You gotta give them credit though. They locked in and tuned in on us, and they got stops when they needed it. So just for us to get better, I feel like we gotta have a better stride, open the floor, just getting down and getting into a play. I felt like we got stagnant a little bit."

That wasn't the only area where the Clippers couldn't get any traction. They were outscored 22-2 in transition points and went to the line only seven times, while the Bucks shot 22 free throws.

"Just gotta keep being aggressive getting to the paint," Leonard said. "Other than me and PG, we gotta keep attacking. I feel like a lot of times we come down, it's one pass, shot, or we're just shooting off the pick and roll. We have good ball movement. I think we're attacking that paint, me and PG, and then it's shots going up. But we'll get better."

On the play of the game, Leonard watched as Jrue Holiday passed to Antetokounmpo, who gave it back to a cutting Holiday, who passed out to Pat Connaughton, who swung the ball to Middleton, who finally found Antetokounmpo open for that powerful drive and slam that gave the Bucks a 103-100 lead with 10.3 seconds left and sent the MVP into a joyous celebration.

It was the kind of ball movement the Clippers make when their offense is flowing. On the ensuing play, George passed to Leonard, who launched a 27-foot contested 3 with 7.3 seconds left and missed.

After the game, Clippers coach Ty Lue fielded several questions about what went wrong and what his team learned from this loss.


"We just lost the game, that's it," said Lue, who will try to get his team back on track at theBoston Celticson Tuesday. "We shot 44 3s, only made 14, and I thought we had a lot of good looks we didn't make. Defensively, I thought we were pretty good outside of transition. But we lost the game. OK.

Antetokounmpo's world is going pretty well at the moment. The Bucks (21-13) have rebounded from a five-game slide with a five-game winning streak. And the most recent victory came against Leonard, who helped the Toronto Raptors eliminate Antetokounmpo and the Bucks in the Eastern Conference Finals two seasons ago.

"When we lost five, a lot of people were panicking," Antetokounmpo said. "Now, we win five and no one is talking about it. That is how it goes.

"Being able to get out of it, snap out of it ... that is what matters. This is important ... it's not over. We are not done yet. We might go again on a seven-game losing streak, 10. Hopefully not. I don't want to put it out in the universe. [But] there is no panic." 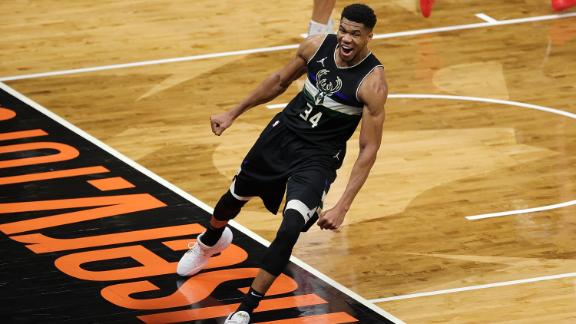 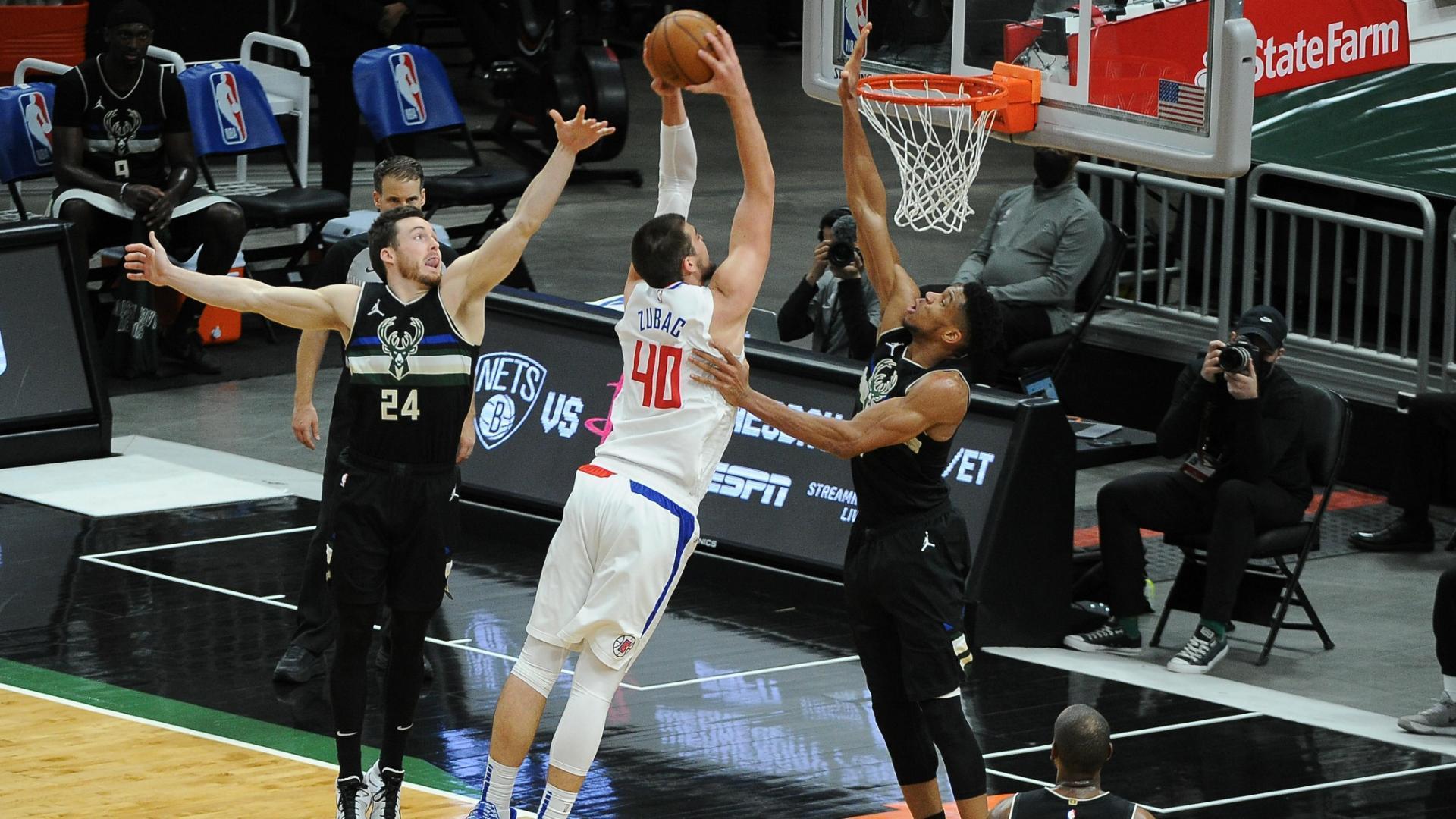 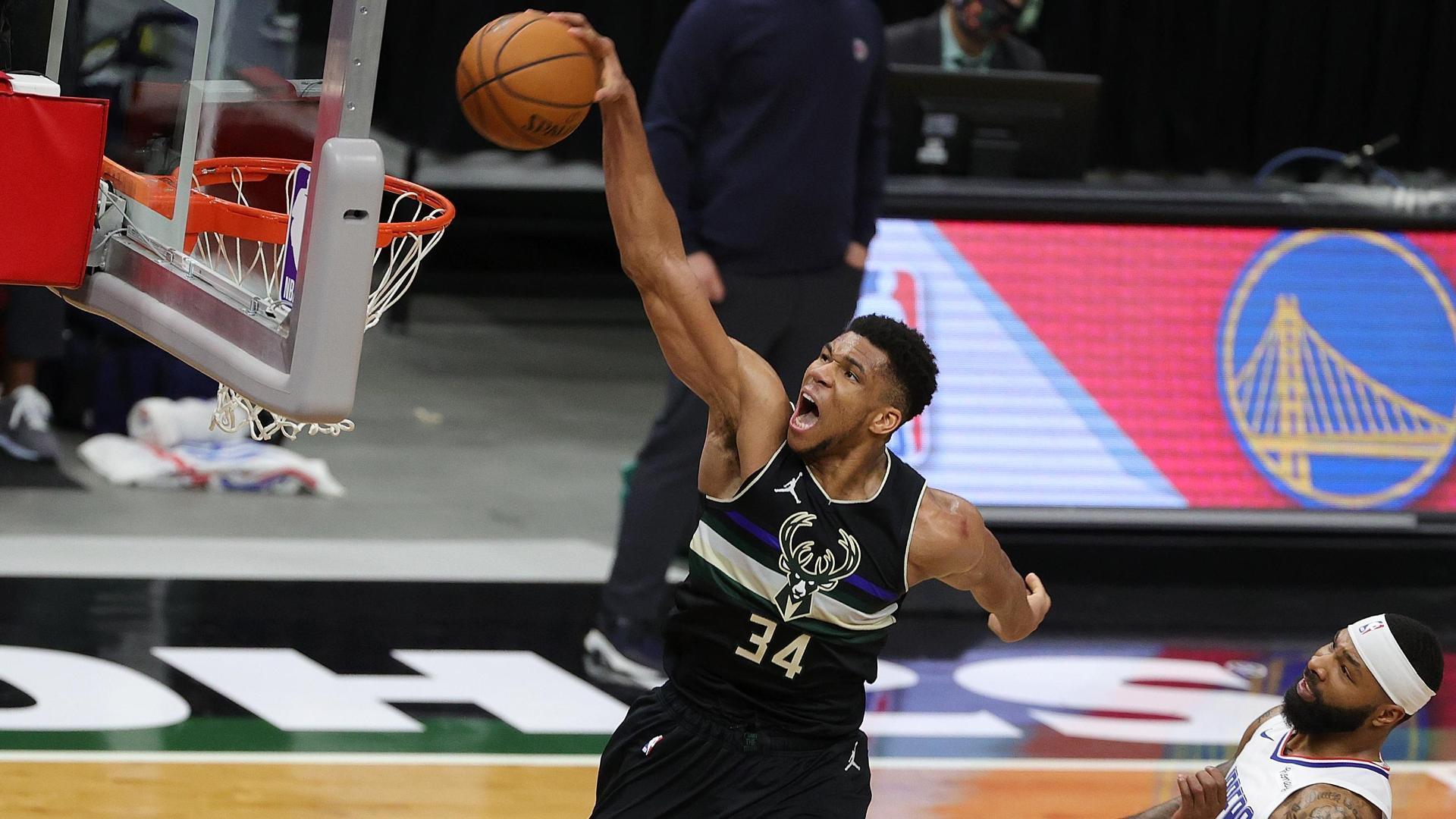