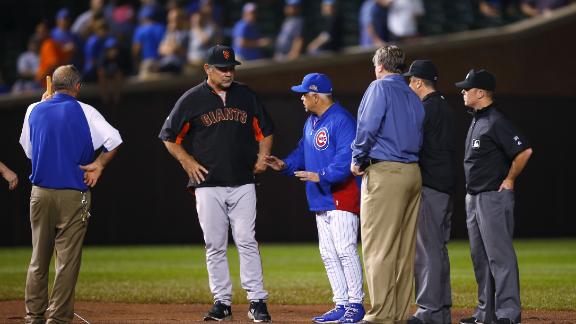 CHICAGO -- The San Francisco Giants have prevailed in their protest of Tuesday night's game, when the field became an unplayable mess after the Chicago Cubs ground crew was unable to get the tarp on in time in the bottom of the fifth inning.

The game between the Giants and Chicago Cubs will resume at 4:05 p.m. CT Thursday before the teams' regularly scheduled game. It will start in the bottom of the fifth inning with the Cubs leading 2-0.

It is the first time an MLB team has won a protest since 1986.

"I thought we had a strong case,'' Giants manager Bruce Bochy said. "I'm just thankful and grateful that they [MLB] were open minded.

"They listened and they looked at it, and I think it's the fair thing to do.''

The league determined the Cubs' inability to deploy their tarp "was caused by the failure to properly wrap and spool the tarp after its last use," according to an MLB statement.

The field got soaked in just 15 minutes of a hard downpour, halting play after 4 1/2 innings, the minimum length for a regulation major league game. That began a 4-hour, 34-minute delay that extended until the victory was awarded to the Cubs in the wee hours Wednesday morning.

The Giants decided to protest based on Rule 4.12 (a) (3), which states a game can be suspended due to a "malfunction of a mechanical field device under control of the home club." The Cubs' tarp, as determined by Major League Baseball, fell under these guidelines.

The Giants also requested the Cubs forfeit the game but were denied that part of the protest, as crew chief Hunter Wendelstedt determined the grounds crew did everything in its power to get the field playable again.

"Our grounds crew does a great job," Cubs general manager Jed Hoyer said. "A pretty good batting average when it comes to getting these right. Obviously, you have to bat 1.000 in this situation."

The Giants said they were surprised by the decision.

"How couldn't you be?" pitching coach Dave Righetti said. "How many have been upheld?"

Hoyer called it a "just'' decision.

"The last thing you want is a playoff team feeling bitter about the result here,'' Hoyer said. "And obviously it was caused by our organization. It's a good outcome.

"Hopefully we win the game. We have a 2-0 lead and pick it up from there."

Cubs manager Rick Renteria agreed with Hoyer that the game should be completed.

"I believe in karma, OK,'' Renteria said. "The league has made the decision that this is what should be done. We're going to abide by it, and hopefully we go out there and finish it off.''

The Giants are the first to prevail in an MLB game protest in 28 years. On June 16, 1986, the Pirates won a protest that a game in Pittsburgh against St. Louis ended prematurely with the Cardinals leading 4-1. The game was resumed two days later, and the Cardinals held on to win 4-2.