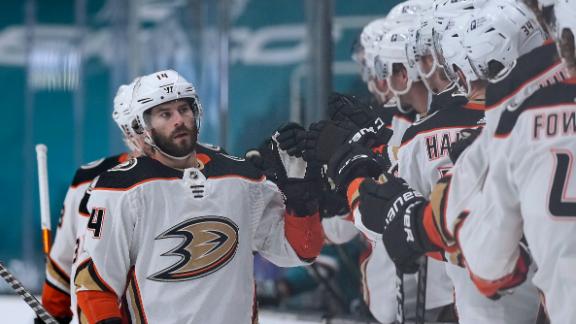 SAN JOSE, Calif. -- - David Backes and Nicolas Deslauriers each had a goal and an assist, and the Anaheim Ducks stopped San Jose's four-game win streak with a 5-1 victory over the Sharks on Tuesday night.

Adam Henrique, Isac Lundestrm and Max Comtois also scored for Anaheim, which had lost three in a row. John Gibson made 34 saves.


"Really impressed with our guys' prep," Ducks coach Dallas Eakins said. "You could feel it that it was each and every guy was involved tonight."

"I thought they were the better team tonight," Sharks coach Bob Boughner said. "You've got to give it to them. Gibson played well. We had some chances but we weren't good enough for long enough stretches of time."

Anaheim grabbed control with three goals in the second.

Comtois made it 2-0 when he got his 11th goal 24 seconds into the period, converting a power-play opportunity.

After Marleau responded for the Sharks, Lundestrm made it 3-1 with his sixth at 2:44. Deslauriers tacked on his fourth of the season with 4:41 left in the period.

Backes added an empty-netter goal with 7:13 remaining, his third of the year. That was more than enough offense for Gibson, who earned his eighth win of the season.


"I think that's the kind of effort we know we're capable of and we've been looking for most of the season," Backes said. "We've had spurts of really good connected play and tonight was more of a 60-minute effort."

Marleau scored his 565th goal, moving past Mats Sundin and Joe Nieuwendyk into sole possession of 23rd place on the career list. Marleau is eight goals behind Mike Bossy for 22nd.

Sharks: Defenseman Marc-Édouard Vlasic sat out with an upper-body injury and likely will not return this week. Vlasic was injured in the first period of Saturday's game against the Los Angeles Kings.

With Vlasic out, Christián Jaro made his Sharks debut, finishing with two blocked shots in 11:41. The Sharks acquired Jaro in a trade with the Senators in January.