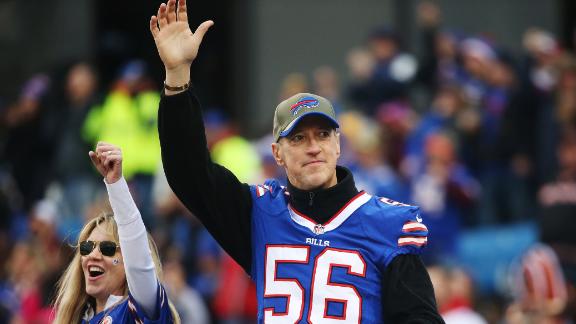 PITTSFORD, N.Y. -- Buffalo Bills general manager Doug Whaley said Wednesday that the Bills are "almost in quarterback purgatory" because they do not have a franchise quarterback and are unlikely to pick near the top of the draft in coming years.

"We're good enough that we're not going to have the first or second [overall] pick," Whaley told WGR 550 on Wednesday. "We hope we're not in that position. Hopefully now we're drafting in the teens and the 20s and the 30s. So you're not going to get those college guys that are coming out.

"Franchise quarterbacks hit the free-agent market? Name one. Unless they have an injury. So it's going to be an onus on our scouting staff to find a guy in the lower first round, second or third round. We accept that challenge. It's where we are, and it's been good that we have enough talent around that we're in that situation, but it's not an easy answer. There isn't [one]."

Finishing with a 9-7 record last season, the Bills would have selected 19th overall in May had they not dealt that pick to the Cleveland Browns as part of the Sammy Watkins trade in 2014.

The Bills are in the midst of a three-way quarterback competition in training camp between veteran Matt Cassel, former Baltimore Ravens backup Tyrod Taylor and the Bills' 2013 first-round selection, EJ Manuel.

"Year 3, I would say, [Manuel] is a tad behind," Whaley said. "If last year was his first year, I know he's further along this year when he was last year, let's say that, from that experience. But that was the original plan [in 2013]: sit behind Kevin Kolb, learn one or two years and then see what he can do.

"I've been happy with EJ as far as his knowledge and things," Ryan said. "I think he's picking up the system really well now. His reads have been a little sharper. I'd still like to see more consistency with his accuracy. And so I think that's probably what Doug is referring to."

"That's why mentally, it's not just how the guy is throwing in 1-on-1s or 7-on-7s or whatever, it's the mental thing that we want to do with our quarterback that we need from us. We want to get ourselves in good plays. We know, in my opinion, I got as good as it gets an offensive coordinator in Greg Roman."

Whaley also expects the Bills' running game to take pressure off their quarterbacks.

"And until you get that [franchise quarterback], what is the best way to win?" Whaley said Wednesday on WGR 550. "And it's running the ball, playing good defense and protecting the ball. So what we're saying is, 'Let's get as much talent around the guy, and all he has to do is make the right decision. He doesn't have to put the team on his back and throw it 50 times a day.'

"We may not throw it more than 20 or 25 times a day. But he has to be able to make the right decision, get [the ball] to his playmakers and let them do what they got to do."