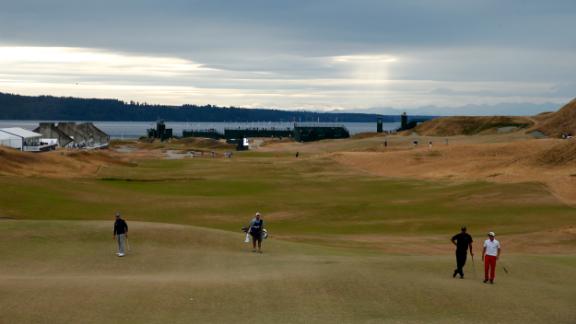 UNIVERSITY PLACE, Wash. -- It is a bit of a shock to the eye: to see greens on a championship golf course that are not, well ...green.

That is due in part to the unusual grass at Chambers Bay -- fescue -- which is seen more on links courses in Great Britain and Ireland than anywhere in the United States.

That doesn't necessarily mean the greens are poor. It is typical for such greens to have a brownish, yellowish tint.

And yet, they were the subject of the most consternation on Day 1 of the 115th U.S. Open, with Sergio Garcia, who shot 70 on Thursday, even venting on Twitter.

Garcia received some flak from those on Twitter and further responded:

He wasn't alone, however, in having an issue with the greens.

"They are not the best that I've ever putted on," said world No. 1 Rory McIlroy, who shot 72. "I still feel like if you make a good enough stroke and you have the right speed, there's a good enough chance the ball will go in.

"I need to find a rhythm in my stroke over the next three days, work a bit on the putting green, and hopefully, it will be better."

The issue with the greens appears to be another grass that competes with the fescue called poa annua. It has grown at a faster rate and causes the surfaces to be bumpy in spots.

"The green surfaces are very poor, some poorer than others. I'm not trying to be controversial," said Colin Montgomerie, who won the U.S. Senior Open last year to qualify for this tournament. "No one is going to putt consistently well on these greens."

Mike Davis, the USGA's executive director, noted prior to the tournament that the aesthetic of the greens is not what people are used to seeing on a weekly basis on the PGA Tour.

"They look splotchy," he said. "Ultimately, what we are after is how they play, how does the ball react when it hits, how does it putt. Obviously, we want them as smooth as they can."

At this point, that is not the case.

"I think the biggest challenge is that the green speeds are different from green to green," said Phil Mickelson, who has otherwise lauded the course. "That's going to wreak havoc on our touch. And that's the only thing I could possibly think of that is not really positive, because I think it's been very well done.

"The best way to wreak havoc with us is change the speeds of the greens from green to green, no question."