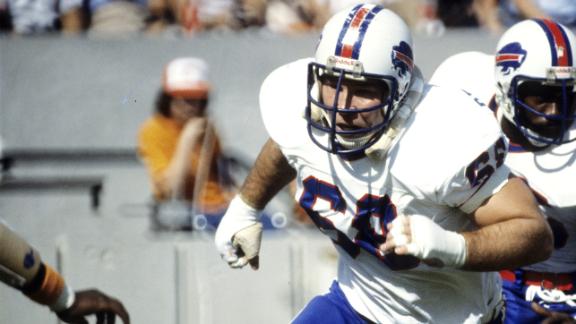 As the Buffalo Bills continue the process of finding a new owner, NFL commissioner Roger Goodell believes the team must have a new stadium to remain viable in its region.

"Yes, I do," Goodell told reporters Wednesday in New York City. "We said at the time when they entered into a new lease that this is really a short-term solution. We need to find the right long-term solution that's good for the community and can help the Bills to continue to be successful in western New York."

The Bills are entering the second year of a 10-year lease with Erie County to play in Ralph Wilson Stadium, which opened in 1973. Despite $130 million in renovations this offseason, the facility lacks the amenities of most others in the NFL.

The Bills, the county and the state formed a 20-member committee this year that will explore the possibility of replacing the stadium, but county executive Mark Poloncarz said Wednesday that a more extensive renovation of the venue remains on the table.

"At this time, all options should be part of the discussion and nothing should be disregarded," Poloncarz said in a statement released in response to Goodell's comments.

AECOM, a California-based architectural and design firm, was hired Tuesday to identify three or four sites across the region that could serve as the team's new home. The firm has until July 11 to produce a feasibility study, which will eventually be distributed to prospective ownership groups.

The Associated Press reported Saturday that the Bills could be sold by July and the sale approved by NFL owners as soon as the league's meetings in October.

The Bills' lease with Erie County prevents the team from moving until early 2020, at which point the next owner could potentially relocate to another city by paying $28 million to buy out the remaining three years of the lease.

Goodell emphasized Wednesday that the Bills' sale and potential relocation are separate decisions.

"There's two votes. There's one vote to approve an ownership, and if a team potentially relocates, it's another vote," Goodell told reporters, according to The Buffalo News. "We're not making those one vote."

Goodell is a native of Jamestown, New York, and has previously expressed his interest in keeping the Bills in the region.

Future Of The Bills In Buffalo
ESPN.com Bills reporter Mike Rodak discusses Joe DeLamielleure's speculation on whether the Bills will remain in Buffalo.