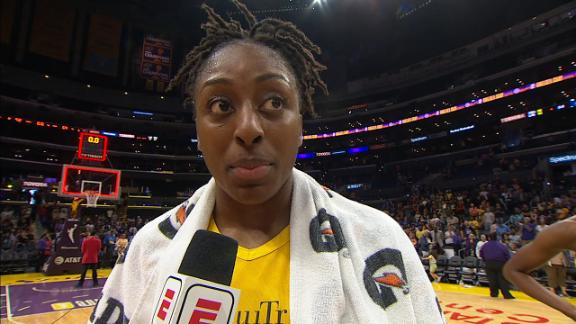 LOS ANGELES -- The Los Angeles Sparks, under the guidance of first-year coach Derek Fisher, have battled through adversity all season and leaned on that experience in their single-elimination second-round playoff game with defending-champion Seattle.

No. 3 seed Los Angeles, which had key contributors Parker, Riquna Williams and Maria Madeeva combine to miss 73 games this season, advanced to play second-seeded Connecticut Sun, which earned a double-bye to the semifinals. The best-of-five series begins Tuesday in Connecticut. The WNBA said that they will pay for charter flights for the winners of the second round games to fly east so that the teams can have a full day to prepare for the first game of the semifinals.

Natasha Howard gave the Storm their first lead since early in the second quarter with a 3-pointer that made it 56-55 with 3:11 left in the third but Parker answered with a layup, Gray hit a pull-up jumper and, after a short basket by Seattle's Jewell Loyd, the Sparks (scored 21 of the next 24 points to pull away for good.

"During the regular season, I think we were in Atlanta and I think we had seven, eight people that were ready to go into the game," Gray, who hit four 3-pointers on Sunday, said. "It is rewarding to have a full roster."

Howard led the Storm (18-16) with 20 points, 11 rebounds and four steals. Loyd had 11 points and Mercedes Russell and Jordin Canada each scored 10.

The Sparks won two of their three meetings with the Sun (23-11) in the regular season. The last came in Los Angeles on Aug. 25 and snapped Connecticut's four-game win streak, knocking the Sun from the top of the WNBA standings, one game behind the Washington Mystics.

"We're fortunate enough to now get into Connecticut tonight as opposed to tomorrow," Fisher said. "So, hopefully that will help us.

"We know they (the Sun) are good at home. We know the crowd is going to be into it but we are going to have to lean on our defense."

After Howard's 3 that gave the Storm their final lead late in the third, Seattle made just one of its next 12 field-goal attempts and committed six turnovers over the next nearly-eight minutes as the Sparks built a 21-point lead.

"In the second half, the Sparks picked up their defense," Howard said. "They played more aggressive and we got back on our heels a little bit. I give credit to the Sparks for what they did tonight."

After Canada hit a short floater, Howard scored eight straight points to cap a 10-0 run that made it 18-11 but the Sparks scored 11 of the next 13 points before Crystal Langhorne's 3-pointer gave Seattle a 23-22 lead at the end of the first quarter.

Gray scored eight points, including two 3-pointers, in a 13-4 spurt to open the second that gave Los Angeles a nine-point lead midway through the period and the Sparks led for all but 40 seconds the rest of the way.

Seattle's Sue Bird, an eleven-time All-Star and the WNBA's all-time assist leader, and Breanna Stewart -- the 2018 WNBA MVP and Finals MVP -- missed the season due to knee and Achilles injuries, respectively.

"You want every year to end with a win but you also want years that push your franchise forward," Storm coach Dan Hughes said. "In one that we could have taken a step back, I think we actually went forward."