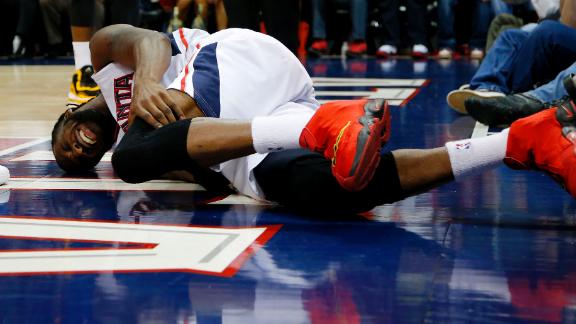 Carroll crumpled to the floor in pain, lay on the ground for several minutes and needed help off the floor with about five minutes left in the Eastern Conference finals opener.

He was supported by staff and teammates as he hopped on one leg to the locker room.

Carroll, the Hawks' starting small forward, was to get an MRI on the injury Thursday morning, coach Mike Budenholzer said. Carroll was seen using crutches after the game.

"He's such a great teammate," Budenholzer said. "Everybody is just concerned about DeMarre. ... I'm hoping he's ready to help us as soon as possible."

Carroll injured his knee on a fast break when he landed awkwardly on his left foot as he gathered the ball to elevate for a layup attempt. He was guarded by Cavs wing Iman Shumpert, although there was no contact on the play.

Players, coaches and trainers gathered around Carroll on the baseline before he was helped to his feet. He couldn't put pressure on the leg as he was helped off the floor and to the locker room.

"It was hard to watch," Atlanta'sKyle Korversaid. "We love DeMarre like a brother. ... We'll see tomorrow how he is. Obviously, it didn't look good."

Carroll, limited to five points and one rebound with two steals in 35 minutes, had been the team's most reliable player in the postseason entering Wednesday.

In 13 games, including Wednesday night, he has averaged 17.1 points, 6.8 rebounds and 2.2 assists with a shooting percentage of 52.4 percent, including 43.9 percent from beyond the arc.

Averaging a career-high 12.6 points with 5.3 rebounds per game this season for the top-seeded Hawks, Carroll also had been a big part of the Hawks' plan for containing the offense of LeBron James.

James patted Carroll on the shoulder and offered words of encouragement to him as he was helped off the floor.

"The NBA is a brotherhood," James said. "You never want to see anybody get hurt."

The Hawks are depleted on the wing after losing Thabo Sefolosha for the remainder of the season to a broken leg suffered in an incident last month with law enforcement in New York.

Kent Bazemore replaced Carroll after his injury and presumably would be the starter should Carroll be unable to return to action.

Carroll will enter free agency following the season, as he completes a two-year, $5 million contract with Atlanta.