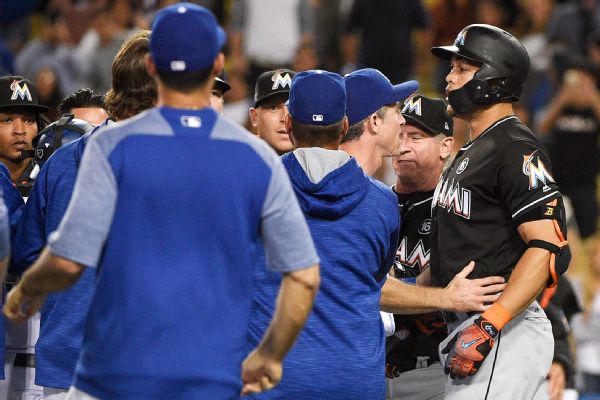 Dodgers reliever Ross Stripling and bench coach Bob Geren, along with Marlins manager Don Mattingly, were all ejected after benches and bullpens emptied in the top of the ninth inning Friday night in L.A.'s 7-2 win.

It started in the eighth, when Cody Bellinger hit a two-run homer and Marlins reliever A.J. Ramos hit the Dodgers' next batter, Brett Eibner, in the left hip with a pitch. Ramos said the pitch got away from him.

"If they have a problem with it, they can see me before the game, after the game, whenever they want to see me,'' Ramos said. "It doesn't have to be at the game.''

Miami slugger Giancarlo Stanton led off the ninth, and Stripling's first pitch went behind his lower back. Stanton did not charge the mound but began a slow walk forward as players streamed onto the field. Stripling also said the pitch simply got away from him. "I think it was just one of those things with Ramos, the ball got away from him arm side, and the same thing with our guy,'' Dodgers manager Dave Roberts said. "Benches cleared, and things were taken care of.''

Mattingly and Geren exchanged heated words during the players' scrum in the middle of the field and had to be restrained from each other. Mattingly said he was initially upset that the Dodgers were swinging at 3-0 pitches in the eighth with a 5-0 lead.