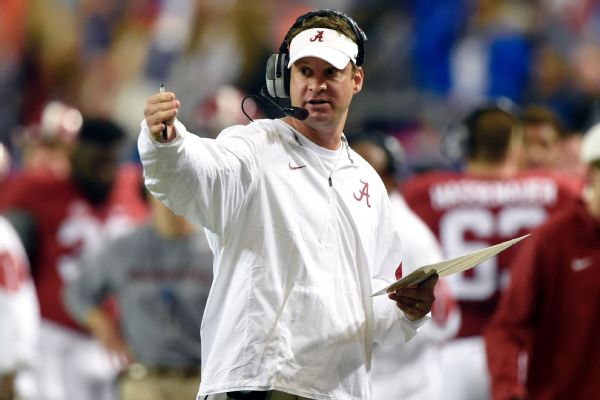 While Lane Kiffin was said to be nearing a deal to become Houston's next head coach, the school's board of regents chairman said Friday night that the Cougars never were close to hiring the Alabama offensive coordinator.

Tilman Fertitta told KILT-AM in Houston that offensive coordinator Major Applewhite, whom the school promoted to head coach earlier Friday, was a better fit than Kiffin. Fertitta called in to the sports radio show "Gallant At Night" after he heard the hire being discussed on air.

Asked whether Kiffin was ever close to becoming Houston's coach, Fertitta said: "Never. He was no closer than anybody else. Those [stories about him being close] are all put out by his agents, because that's the way they play the game."

In response to reports that Kiffin was put off by Houston's desire to put a steep buyout clause in the next coach's contract to make it difficult for the coach to leave after two seasons -- as former coach Tom Herman did in order to accept the head position at Texas -- Fertitta said that wasn't the case and that Kiffin had assured him he would stay at Houston for an extended period if hired.

"He said 'Write the contract the way you want it,'" said Fertitta, who also is a prominent booster for the school's athletic program. "Lane Kiffin looked me in the eye and he knew when he sat down at that table that he was going to go with the contract that I put in front of him with the buyout that I wanted in front of him. And we never even got there."

The range for the buyout that Fertitta sought was the remainder of the contract at the time the coach leaves. The Houston Chronicle reported Friday that such a buyout will, indeed, be in Applewhite's deal. Sources told ESPN on Friday that Applewhite will receive a five-year contract. Financial terms were not immediately available.

Fertitta also expressed concern with Kiffin's potential offensive and defensive coordinator choices and lack of ties to the Houston area.

Applewhite's familiarity and relationships with Texas high school football coaches and the continuity his hire would provide were major factors in the decision to choose him over Kiffin, Fertitta said.

"The Texas high school football coaches bombarded our athletic director [Hunter Yurachek] and said: We want our kids to play for Major Applewhite," Fertitta said. "Here's a guy that's been on the big stage, he was the quarterback at the University of Texas, he has a great relationship with the coaches and high school football in Texas. Lane does not. That was an 'X' against Lane compared to Major.

"Continuity in the program, the kids, the recruits today playing wanted Major Applewhite. They let it be known. It was just one thing after another that had steamrolled to Major."

Fertitta, an entrepreneur who owns the restaurant corporation Landry's Inc. and is the host of a CNBC reality television show called "Billion Dollar Buyer," said he interviewed Kiffin twice and admitted that when Houston's coaching search started, he did not originally intend to hire either of the two internal candidates: Applewhite or defensive coordinator Todd Orlando, who was named interim head coach when Herman left. Applewhite, Kiffin, Orlando, formerLSUcoach Les Miles and current Oklahomaoffensive coordinator Lincoln Riley all interviewed for the job.

"I'll be 100 percent honest with you. When this started, I thought that we needed to go out and get a name-brand coach, because, to me, it's all about brands," Fertitta said. "Nobody understands that better than me. And I wanted the University of Houston to stay relevant, OK? I think Les Miles is a fine coach and he's going to be a great coach for somebody, and I think the same thing of Lane Kiffin. I was very impressed. But when I looked at the whole picture and totality, I truly think in my heart -- and so did everybody else on the committee think -- that Major Applewhite was the right fit."
Related topics:
sportsespnlane kiffinhouston cougarscollege football
Copyright © 2022 ESPN Internet Ventures. All rights reserved.
TOP STORIES
Boy killed, girl injured during ATV hit-and-run in Apple Valley
Video shows man attacking Malibu home, vehicle with pickaxe
Carlos Santana collapses during Michigan concert
More than $1M raised for boy whose parents died in IL shooting
Charges filed in overdose deaths of LA model, friend
Family seeking more answers about LAPD officer's death
Volvo's new EV helping lead the company to an all-electric future
Show More
Man convicted in 2019 Long Beach crash that killed couple, 3-year-old
July 4th fireworks trigger air-quality alert in SoCal
'Crime tourist' from Chile convicted in Ventura County burglary
New Range Rover retains luxury features, foreshadows electric model
Highland Park parade shooter charged with 7 counts of murder
More TOP STORIES News