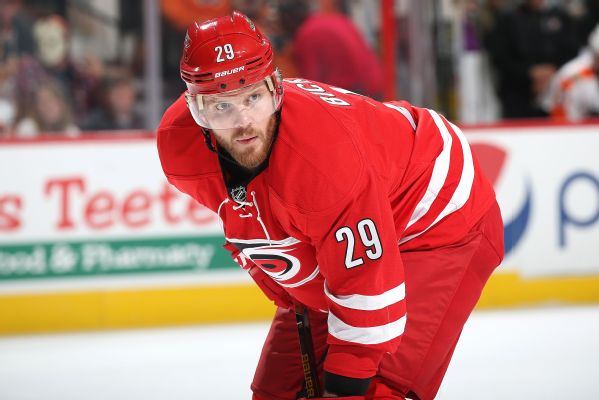 The 30-year-old was acquired by Carolina from the Chicago Blackhawks in the offseason, and he had appeared in seven of Carolina's 13 games this season, scoring once while averaging 9:42 in ice time per game.

"Since the 2015 playoffs, I've been struggling to understand what was going on with my body," Bickell said via a statement released by the team Friday afternoon.

"Again during the past few weeks, it felt like something wasn't right," Bickell added. "Obviously this is a bit of shock for my family and me, but I am hopeful I will be able to return to the ice and continue playing the game that I love."

"First and foremost, the most important thing is for Bryan to take care of himself, and our thoughts are with him and his family," Francis said in the same statement. "He will need to take some time to rest in the immediate future, and we will support him as he takes the necessary steps for his health. We ask that his privacy be respected during the process."

"Our thoughts are with Bryan, his family and the Carolina Hurricanes during this challenging time. He has built so many lasting relationships in Chicago both inside and outside of the Blackhawks organization based on his play on the ice and character off of it. Together, we will keep him in our thoughts during his fight against the disease."

Blackhawks coach Joel Quenneville also addressed the news, saying, "He's a special guy. We're thinking about him, and our thoughts and prayers are with him. It's tough to hear something like that. He has a tough road ahead. He was special for us and instrumental in us having a lot of success here. We wish him well."

Bickell was part of three Stanley Cup-winning teams in Chicago.

"It's pretty shocking. What can you say?" Blackhawks captain Jonathan Toews said. "I think everyone in this room, in this organization, as close as we all are to Bicks, our hearts go out to him. We wish him the best health possible. Hopefully he can hang in there and find ways to stay strong despite his condition."

Bickell is the second NHL player in recent years to be diagnosed with MS, an incurable disease that attacks and scars the protective covering of nerves in the brain and spinal cord.

Minnesota Wild goaltenderJosh Harding was diagnosed with the disease in November 2012. Harding played sparingly after his diagnosis.

Another former goalie, Jordan Sigalet, was diagnosed with MS in late 2003, and he has been a vocal supporter of research into the disease. Sigalet, a former standout at Bowling Green State University, is currently the goaltending coach of the Calgary Flames. He told ESPN's Joe McDonald that he would reach out to Bickell.

"I know first-hand what Bryan is going through, and it comes as a shock at such a young age when you are an elite athlete and in the prime of your life," Sigalet said.

"For me, it was great to have my teammates and family around for support and to keep a positive attitude and outlook. The disease is so different for everyone, but there are so many great treatments and resources available today that can help manage the disease," Sigalet added. "My thoughts go out to him and his family, and I wish him nothing but the best."