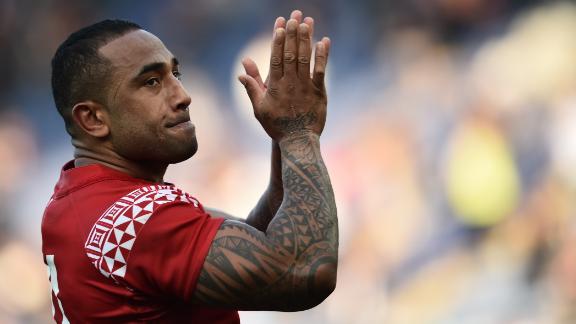 Tonga flyer Telusa Veainu has revealed he would relish the chance of trying his hand at the NFL if a team came calling for him.

As ESPN reported, NFL agents have been watching closely at the Rugby World Cup, hoping to spot a star capable of following in the footsteps of Jarryd Hayne by switching one oval-ball game for another.

Rugby league sensation Hayne left Australia's Parramatta Eels to become a running back for the San Francisco 49ers in March this year, and Veainu, who has caught the eye in Tonga's Pool C campaign with a brace of tries, admitted he would jump at the chance.

"After watching Jarryd Hayne, I'd love to have a go and see what it's like," Veainu told ESPN. "What he's done is pretty impressive, and if I got a shot at it, I wouldn't mind trying it out for a week or so to see what it's all about.

A winger with pace to burn, Veainu has been tipped by ESPN as a player who could succeed in a running back role, transferring his ability to break the line to the NFL. But while he suggested there might be a crossover in the basic skills of the two sports, Veainu admitted he might struggle to learn the extensive new tactics employed in the NFL.

"Looking at my skills, I'm quite small compared to some of the bigger guys, but I guess the simple things like catching and evasion are similar," he said. "I know learning all the new systems and routes would be hard because I heard their playbooks are really thick. The rugby playbook isn't that thick, really."

Before he gets too carried away with dreams of the NFL, Veainu has a World Cup to finish with Tonga. Despite a thumping victory over Namibia, the Pacific Islanders have no chance of reaching the quarterfinals after defeats by Georgia and, most recently, Argentina.

However, they face favourites New Zealand on Friday in what will be a particularly poignant clash for Veainu. The Melbourne Rebels wing turned out for the All Blacks' under-20 side before pledging his allegiance to Tonga, although he insisted he will be treating this match just like any other.

"I haven't really thought about it, to be honest," he said. "For me, I've just been taking one thing at a time, whether that's making one tackle, making a run or taking a catch. I haven't really been thinking about New Zealand. Every match is like a final for us."