Indecision like DeAndre Jordan's is nothing new in sports 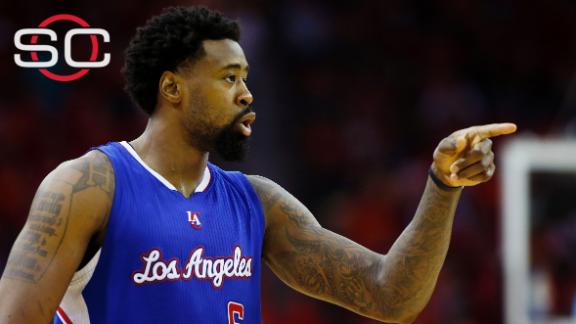 The Los Angeles Clippers put on a last minute, full-court press to convince coveted free-agent center DeAndre Jordan to backtrack on an agreement to sign with the Dallas Mavericks.

Jordan committed to a four-year deal worth in excess of $80 million with the Mavs last week, but the seven-year veteran reportedly soon became "torn" and "unsure" about his decision.

Jordan wavered on his commitment to Dallas on Wednesday, hours before the start of the NBA's official free-agency signing period, and ultimately re-signed with the Clippers for four years and approximately $88 million.

With this drama as the background, Jordan joins an exclusive club of indecisive sports figures:

Brett Favre
After considering retirement from the Green Bay Packers following the 2006 and 2007 seasons, the three-time MVP announced the end of his playing career in March 2008, saying he didn't have "anything left to give." Five months later, after the Packers denied his request for unconditional release, he unretired and reported to Green Bay's training camp. He was subsequently traded to the New York Jets, where he led the NFL in interceptions during his only season with the team. In February 2009, Favre re-retired, saying "there's no way" he would play again. After receiving his release from the Jets, Favre was linked to discussions to play for the Minnesota Vikings. In late July, Favre told the Vikings he wouldn't unretire. Three weeks later, he was in uniform practicing with the Vikings. He led Minnesota to the NFC Championship Game in the 2009 season, but retired for good after a disappointing 2010 season.

A day after agreeing to succeed Bill Parcells as Jets head coach in January 2000, Belichick handed team president Steve Gutman a note saying he was resigning as "HC of the NYJ." Belichick went on to win four Super Bowls in six appearances with the New England Patriots. The Jets have earned six playoff berths this century -- including two AFC Championship Game appearances under Rex Ryan -- but have yet to end a Super Bowl drought that stands at 46 years and counting.

Billy Donovan
In June 2007, two months after leading Florida to its second consecutive men's basketball national championship, Donovan accepted a five-year, $27.5 million offer to coach the Orlando Magic. Less than a day after being introduced as Magic coach, he reportedly reversed his decision. He stayed at Florida for eight more seasons, including a Final Four berth in 2014. This offseason, Donovan became coach of the Oklahoma City Thunder.

Roger Clemens
The 354-game winner is baseball's answer to Favre. Clemens retired after a farewell tour of American League ballparks in 2003, only to sign a one-year deal with the Houston Astros soon afterward. He returned to the Astros in 2005 after saying he was "99 percent" retired. Clemens again flirted with retirement following the 2005 and 2006 seasons, but he returned to pitch for the Astros in 2006 and Yankees in '07. He pitched in two games for the independent Sugar Land Skeeters in 2012, leading Astros owner Jim Crane to speculate that Clemens, 50 at the time, could pitch for his team. Stay tuned.
Johnny Manziel

Now, we know him as Johnny Football, the polarizing Cleveland Browns quarterback. Back in 2010, Manziel accepted a scholarship offer from Chip Kelly to attend Oregon. Several months later, Manziel opted to stay closer to home and attend Texas A&M. Manziel won the 2012 Heisman Trophy as a redshirt freshman. Kelly rebounded nicely before heading to the NFL'sPhiladelphia Eagles, though, securing a commitment from Marcus Mariota, who won the Heisman as an Oregon redshirt junior in 2014.

Urban Meyer
In December 2009, not quite a year after leading the Florida football program to its second national championship in three seasons, Meyer stepped down as Gators coach because of health concerns. He reconsidered and returned to Florida for another season. In December 2010, Meyer resigned, saying he wanted to spend more time with his family. After one season away from coaching, he took the reins at Ohio State in 2012. He is 38-3 in three seasons with the Buckeyes, including a championship in the first season of the College Football Playoff.
Rick Majerus
The longtime Utah men's basketball coach accepted the head-coaching job at USC in December 2004 less than a year after leaving the Utes because of health concerns. Despite joking about his health at his introductory news conference, Majerus never signed his contract with USC and backed out of the deal days later. He said he was overwhelmed by the return to coaching but eventually returned to guide the Saint Louis program from 2007 to 2012. He died in December 2012 at age 64. After Majerus turned down USC, the Trojans hired former Iowa State and Chicago Bulls coach Tim Floyd to take over the program.
Dana Altman
In May 2007, less than 24 hours after agreeing to become men's basketball coach at Arkansas, Dana Altman reversed course and returned to Creighton, where he coached the previous 13 seasons. He remained coach of the Bluejays for three more seasons. He became coach at Oregon in 2010 and is 123-57 in five seasons there.
Frank Gore

The veteran running back informed teams he intended to sign with the Philadelphia Eagles in free agency this offseason. Days later, he had changed his mind and opted to sign instead with the Indianapolis Colts, believing he fit better into that team's offensive scheme.

Gregg Marshall
A day after being introduced as men's basketball coach at the College of Charleston in June 2006, Marshall did an about face and returned to Winthrop, where he had coached the previous eight seasons. He stayed at Winthrop for another season before taking over at Wichita State in 2007. He's 204-76 in eight seasons with the Shockers, including a Final Four appearance in 2013.
Bobby Cremins
Georgia Tech's men's basketball coach left the Yellow Jackets after 13 seasons in 1993 to become coach at South Carolina. But wait -- two days later, he returned to Atlanta, where he coached for seven more seasons. Coincidentally, he accepted the College of Charleston job after Marshall backed out in 2006, ending a six-season break from coaching.
Glen Mason
A week after accepting the football head-coaching job at Georgia, Mason told his Kansas players on Christmas morning of 1995 that he would, in fact, remain with the Jayhawks. Later that day, Kansas beat UCLA 51-30 in the Aloha Bowl. A year later, Mason moved on to Minnesota, where he coached from 1997 to 2006.
Eddie Stanky
The veteran MLB player and manager left his job as baseball coach at South Alabama to become manager of the Texas Rangers in June 1977. A day after his only game with the Rangers -- a 10-8 win -- he quit and returned to his previous job, citing homesickness. Stanky coached South Alabama for 14 years, and the school's ballpark now bears his name.

Did we overlook your favorite sports flip-flop? Post it to the comments section.