Jack Eichel glad to be with Sabres, ready to deliver a winner 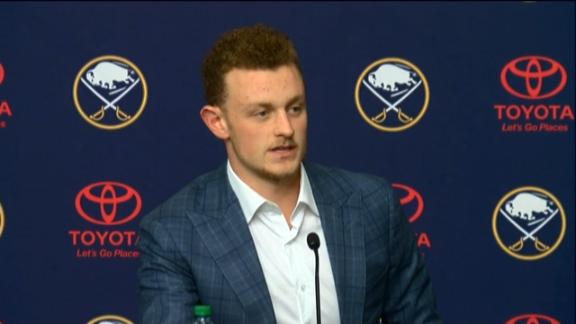 BUFFALO, N.Y. -- Jack Eichel joined his Buffalo Sabres teammates in forming a circle around center ice to begin a pre-practice stretching routine Wednesday, when he suddenly felt Jason Pominville give him a nudge.

It was the veteran forward's polite way of congratulating Eichel a day after agreeing to an eight-year, $80 million contract extension . It was also Pominville's way of inviting the team's 20-year-old franchise star to take his rightful place at center to lead the session.

"I was maybe not embarrassed by it all, but just staying humble," Eichel told The Associated Press, in noting he was honored by the gesture.

"It shows how much they care about me and that they were happy for me," he said. "It means a lot."

A day before Buffalo opens the season hosting Montreal, Eichel was the center of attention after signing the most expensive contract in franchise history. And he's eager to start paying back the faith and long-term commitment the team provided by locking him up through the 2025-26 season.

"It does motivate me to be the best player I can be and bring a winning team to this city," Eichel said. "It's really exciting times, and it's an organization that has belief in me. And I owe a lot to it, and I'm looking forward to achieving it."

That's what the Sabres are counting on in rewarding Eichel with a contract that's tied with Los Angeles Kings forward Anze Kopitar as the 10th richest contract in NHL history.

"One of the big reasons why I took this job in the spring was the excitement of being able to work with a young superstar like Jack Eichel," said general manager Jason Botterill, who took over in May after Tim Murray was fired. "The fact that Jack will now be a part of our organization here in Buffalo for the next nine years sets our organization up for success."

The contract extension doesn't kick in until next season once Eichel completes the three-year, entry-level contract he signed after being selected with the No. 2 pick in the 2015 draft -- a spot behind Edmonton Oilers captain Connor McDavid.

The timing of the deal came as a slight surprise in being reached after negotiations had stalled. Eichel was willing to open the season without an extension before having a change of heart by informing his agents to accept the Sabres' offer.

Now he can focus on continuing to mature into a team leader both on and off the ice after Eichel acknowledged he's "proven nothing" during two "mediocre" seasons in which the Sabres failed to make the playoffs.

"I don't think it took a contract or whatever to force me to be a leader," he said. "It's my third year and I want to expect more out of myself."

The one thing Eichel won't land for now is the team's captaincy.

Botterill announced the Sabres won't name a captain this season to replace Brian Gionta, was not re-signed this offseason. The role instead will be shared by several players, including Eichel.

"Whether you wear a letter on your sweater or not, I think you can always be a leader," he said.

Eichel has shown flashes of being a dynamic offensive threat with his speed and play-making abilities. He led the Sabres with 24 goals as a rookie and had a team-best 57 points last year despite missing the first 21 games with a sprained left ankle.

It wasn't lost on Eichel that he was hurt exactly a year ago, a day before the Sabres opener.

"You learn a lot about going through adversity and I think that in many ways I'm better for it," he said, reflecting back. "More than anything, I'm just excited to lace up my skates and play hockey tomorrow."

"Even at his age, guys already look up to him," Pominville said. "Hopefully, this will take a little bit of pressure away from him, where he doesn't have to think about his contract, and just go out there and play."

Pominville said he felt it was necessary to nudge Eichel into the middle of the group before practice, because it reflects the position the player has attained on the team.

"Obviously, he was probably a little embarrassed and shy, he didn't want to go in there," Pominville said. "But I think everyone wanted him to be there and it was the right thing to do." 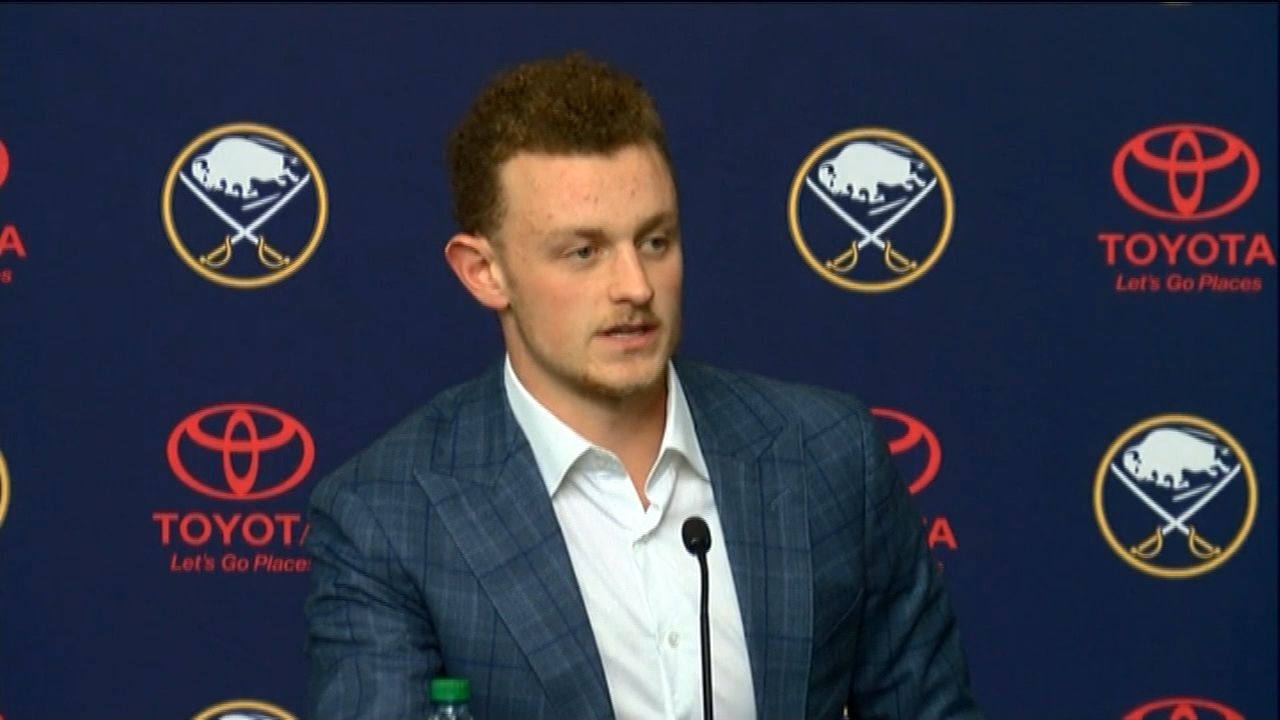