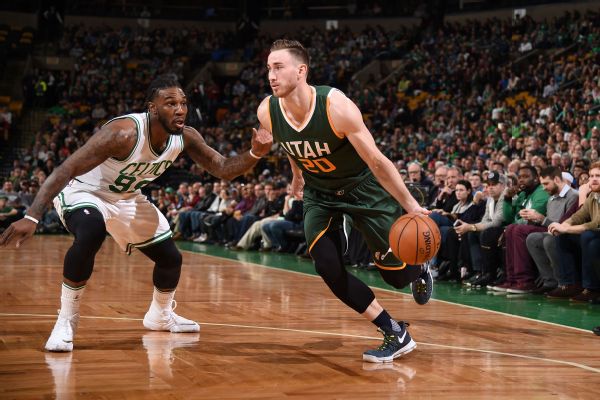 BOSTON -- Recognizing that Utah Jazz forward Gordon Hayward will be a potential free agent this offseason -- and given his Butler University connections to Boston coach Brad Stevens -- Celtics fans greeted Hayward with some audible cheers during lineup introductions before Tuesday's game at TD Garden.

That didn't sit well with Celtics forward Jae Crowder, who just so happens to play the same position as Hayward.

Crowder responded with maybe his best game of the season, scoring 21 points on 6 of 8 shooting, while making all but one of the six 3-pointers that he put up over 35 minutes of floor time as part of Boston's 115-104 victory.

After the game, Crowder sounded off, both in the locker room and on social media, about his perceived slight from the fans.

"I heard the cheering before the game. I didn't like that at all," said Crowder. "I think that was a sign of disrespect to me from the fans. That sparked a little fire in me."

He then took to social media to again voice his displeasure.

Crowder has always been protective of his position, particularly when Hayward has been suggested as a potential free-agent target for Boston. Over the summer, Comcast SportsNet New England tweeted a link to a story about five 2017 free agents the Celtics might target, and Crowder responded with seven sleeping emojis.

Crowder seemed a lot more ruffled after Tuesday's game and, after voicing his displeasure on Twitter, he retweeted a suggestion from a follower that he could return to the Dallas Mavericks, who traded him to Boston in December 2013. When another follower suggested that Crowder could "love it or leave it" in Boston, Crowder responded in his typical all-caps by writing, "I HAVE NO PROBLEM LEAVING IT!"

Celtics fans have often given warm greetings to both former players and potential free agents-to-be. Last season, Kevin Durant drew loud cheers during Oklahoma City's lone visit to TD Garden, and he later gushed about the atmosphere in Boston before taking a meeting with the team in July.

Crowder has quietly put together a quality season, despite dealing with the effects of an ankle injury that sidelined him early on. Crowder owns the best on-court net rating on the team at plus-8.6 points per 100 possessions. The Celtics own a net rating of minus-3.6 points per 100 possessions when Crowder is off the court. (The team's defensive rating spikes nearly four points without him.)

Crowder is in the second year of a five-year, $35 million deal that he signed with the Celtics in July 2015. While his salary is a bargain as the salary cap explodes, Crowder has often maintained he's not overly worried about what others are making.

There is no guarantee Hayward will reach the free-agent market this summer, but his name is invariably mentioned among Celtics targets -- if only because of his connection to Stevens.

When asked at Monday's practice if he pays attention to future free agents such as Hayward during the season, Stevens quickly squashed the chatter.

"I'm not allowed to talk about [other teams' players], as you know," said Stevens. "Certainly, you have an idea on that, generally, but I don't get into that stuff because (A) it's not the appropriate time and (B) out of respect for the other teams."

Hayward scored a team-high 23 points for the Jazz in Tuesday's loss but was a team-worst minus-21, while Crowder was a Boston-best plus-22 during his floor time.

Celtics teammate Isaiah Thomas, who had another monster night with 29 points and a career-high 15 assists, offered high praise for Crowder's play on Tuesday.

"When he's playing that well on offense, it's tough to beat us," said Thomas. "We know he's going to bring it on the defensive end. And when he's making shots and attacking the hole, getting fouls, that just gives us another weapon."