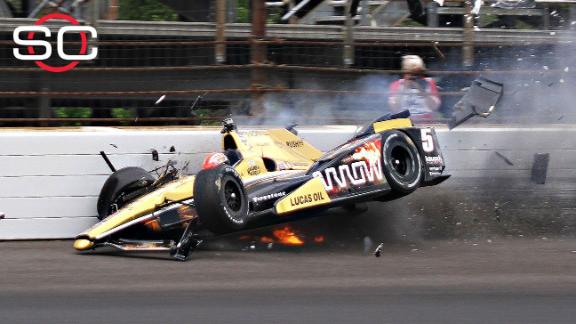 INDIANAPOLIS -- James Hinchcliffe is in stable condition after becoming the latest IndyCar Series driver to crash at Indianapolis Motor Speedway.

Hinchcliffe underwent surgery at Indiana University Methodist Hospital on an injury to his upper left thigh suffered in the crash, the IndyCar Series announced.

Hinchcliffe's leg was pierced by the car's right front rocker and the piece of equipment needed to be removed, according to two people familiar with the crash who spoke to The Associated Press on condition of anonymity because IndyCar and Schmidt Peterson Motorsports were not releasing details of the injury. The surgery also was needed to stop massive bleeding.

"That's the most important thing on our minds right now, and we will do absolutely everything required to ensure a complete recovery."

Replays showed sparks trailing from the No. 5 Honda when it shot directly up the track and struck the SAFER barrier with the right front wheel first. The car spun around one and a half times and briefly overturned before landing on its wheels and stopping in Turn 4.

Hinchcliffe had just completed a lap at 221.3 mph and was drafting the Team Penske Chevrolet of Juan Pablo Montoya when the accident occurred.

It took the IndyCar safety team several minutes to extract Hinchcliffe from the car, which sustained heavy right-side damage. The driver was reported to be awake and alert before being laced on a backboard and transported to IU Methodist Hospital.

"It's gut-wrenching," said defending Indy 500 winner Ryan Hunter-Reay, a teammate of Hinchcliffe's until this season. "It's terrible. There's no other way you can think about it."

This was the fourth time in the past week that an Indy car was pitched upside down, but the first involving a Honda car. The three previous rollovers all featured Chevrolet-designed bodywork.

Helio Castroneves and Josef Newgarden went airborne in crashes last week that raised concerns about the safety of the new oval aero kits. On Sunday, Ed Carpenter flipped his car on its side in practice leading up to Indy 500 qualifying.

IndyCar Series officials made a last-minute rule change for qualifying in the wake of the three Chevrolet accidents, reducing turbocharger boost to decrease power and removing aerodynamic panels.

Scott Dixon of New Zealand took his second Indy pole with a four-lap average of 226.760 mph Sunday -- and there were no wrecks.

"It was shocking," driver Townsend Bell said. "The worst possible accident that you can have here is to be fully loaded right in the middle of the corner and have something break. It was a really horrible circumstance for him."

Derrick Walker, IndyCar's president of competition and operations, has blamed Castroneves' wreck on an aero balance setting that was pushed too far and Newgarden's on a cut tire, and said Carpenter simply had an accident.

A year ago, Hinchcliffe sustained a concussion when struck in the head by debris from another car in the inaugural Grand Prix of Indianapolis. After the road course race, he missed five days while waiting to be cleared and then qualified second, despite limited practice time.

Hinchcliffe, who won at New Orleans last month and is eighth in the driver standings, qualified 24th for this year's 500.

ESPN's John Oreovicz and The Associated Press contributed to this report.