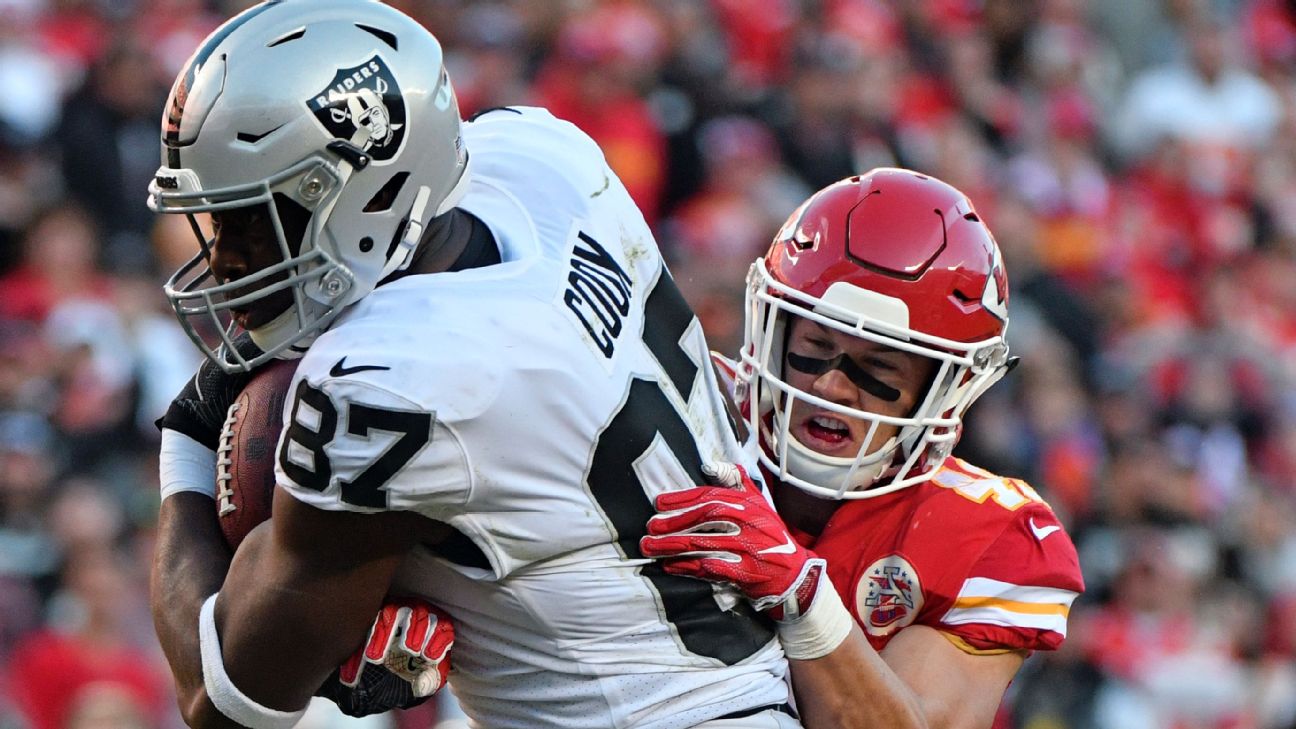 ALAMEDA, Calif. -- Oakland Raiders tight end Jared Cook said there could have been a "bigger" and "better" way for the NFL owners to handle the players' protest against police brutality and racial injustice than the policy agreed upon last week.

"You've got breast cancer [awareness] month," said Cook, who participated in the St. Louis Rams' "Hands Up" pregame protest in 2014. "Just have a social injustice month. Raise money, bring positive light to it, instead of making it negative. Focus on the good and focus on fixing the situation instead of making it worse."

Instead, the new anthem policy instituted at the spring owners meetings says any players or team personnel on the field must stand for the playing of the national anthem before games, or be subject to fines, while players will have the option to remain in the locker room during "The Star-Spangled Banner" with no penalty.

Raiders owner Mark Davis, who has made his stance on social issues clear and essentially gave Raiders players the right to protest how they saw fit as long as it was done with "class," abstained in the owners' vote. San Francisco 49ers CEO Jed York also abstained.

"The narrative has changed, right, on what it was originally about," Cook said of the player-led demonstrations during the anthem, which ranged from sitting or kneeling to raising a fist, interlocking arms or placing a supportive hand on a teammate's shoulder.

"And it's a real issue in this country. And it's sad that you can't have great minds that come together to fix a problem, right, and talk about a problem and make the situation better for all. And I think that it's sad that it's gotten to this point. It's sad that people are losing their lives for minuscule details that aren't even important in the bigger picture. That's just the life that we live; that's the time that we're living in."

Cook, who spoke after the Raiders' OTA practice on Tuesday, again said the narrative of the protests had "veered" from their original purpose.

"We're here for a bigger platform; we're not just athletes," Cook said. "We're people that live this. These are people in our neighborhoods. It's people that we grew up with. It's people that we know that are actually living through these circumstances. So when we speak on it, it's not like we're just speaking out of the side of our neck. It's things that actually touch home and things that we can actually relate to."
Report a correction or typo
Related topics:
sportsespnnational anthemjared cooknflsocial injustice monthoakland raiders
Copyright © 2020 ESPN Internet Ventures. All rights reserved.
More Videos
From CNN Newsource affiliates
TOP STORIES