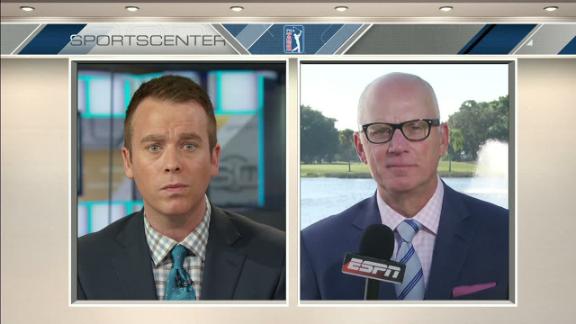 PALM BEACH GARDENS, Fla. -- Jason Bohn's medical issue Friday turned out to be more serious than a mild heart attack, as the golfer needed a stent due to a blockage in an artery.

Bohn's friend George McNeill said after his third round at the Honda Classic on Saturday that he had received a text from Bohn explaining that there was a blockage, and a stent was required. NBC later reported that the blockage was 99 percent and that Bohn, 42, had told the network, "I feel lucky to be alive."

A two-time winner on the PGA Tour, Bohn made the 36-hole cut at the Honda Classic on Friday, but reported discomfort to the tournament's medical staff, which suggested he get to a hospital. An ambulance took him to Palm Beach Gardens Medical Center, and the PGA Tour later reported he had a mild heart attack.

On Saturday, Bohn's agent, Justin Richmond, released a statement saying the golfer was "resting comfortably and in good spirits. He is scheduled to have more tests this weekend."

Bohn told Golfweek magazine earlier in the week that he became ill two weeks ago at the AT&T Pebble Beach National Pro-Am, where he was diagnosed with the flu and bronchitis. He was only playing at the Honda Classic in an effort to try and qualify for next week's WGC-Match Play Championship, which takes the top 64 in the world. Bohn is ranked 71st.

"It's one of the two tournaments that I've never played in my career, so it's really high on my radar," Bohn told Golfweek on Wednesday. "The Match Play and the Tour Championship, those are the only two events that I have not had the opportunity to play. I've played in all the other World Golf Championships. It's right there. I'd love to do it, at least once in my career, to say I've played pretty much every event that's out there."

Bohn lives near Atlanta, where his wife and two sons were Friday. The PGA Tour reported that Bohn's father-in-law was with him at the hospital.

Bohn is a two-time winner on the PGA Tour. He is among the more popular players and often partners with former Secretary of State Condoleezza Rice in the AT&T Pebble Beach Pro-Am. News encouraging for Jason Bohn
Gene Wojciechowski shares the latest on Jason Bohn, who stayed overnight at the hospital after suffering a mild heart attack after the second round at the Honda Classic.