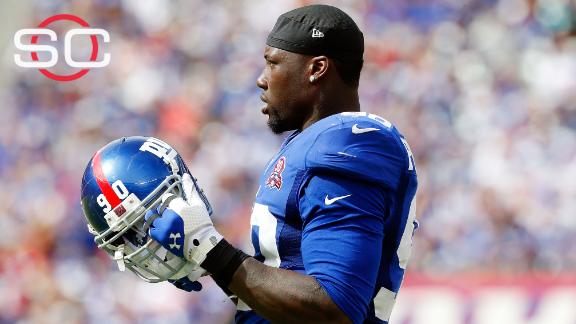 If Pierre-Paul, who had his right index finger amputated Wednesday as a result of a Fourth of July fireworks accident, were to sign the tender, the Giants could put him on the nonfootball injury list at the start of camp. If he's still on that list at the start of the regular season, he has to miss at least the first six games, and the Giants could elect not to pay him for those games. But if Pierre-Paul doesn't sign the tender before camp, then he gains some control over when he gets on the field and could prevent the team from starting him on the nonfootball injury list to begin the season.

Pierre-Paul, the team's leader in sacks last season, has undergone multiple surgeries, including amputation of his right index finger and having pins inserted into his thumb to stabilize fractures. A source said doctors have told Pierre-Paul the fractures will require about six weeks of healing. That timetable would not have Pierre-Paul physically capable of returning until the Giants' second preseason game at the earliest.

"Jason is focused on the process, getting through the medical stuff, and then he will deal with the other stuff,'' the source said.

The Giants designated Pierre-Paul their franchise player and tendered him a one-year, $14.81 million offer. The deadline for franchised players to agree to long-term contracts is Wednesday. If a deal can't be reached by that day, Pierre-Paul would have to play under his $14.81 million tender, unless the Giants decide to withdraw it. The Giants could withdraw the designation and allow Pierre-Paul to become an unrestricted free agent, but they cannot place him on the nonfootball injury list unless he signs the tender and is deemed under contract.

It's unlikely Pierre-Paul would refuse to sign the tender and sit out the season. If so, however, he would become an unrestricted free agent and the Giants would maintain exclusive rights to sign him until the first day of the 2016 league year. The Giants also could put the franchise tag on him again for 2016.

Selected with the 15th overall pick in the 2010 NFL draft, Pierre-Paul didn't start any games his rookie season. He had a breakout year in 2011, posting a career-high 16 sacks and playing a key role in helping the Giants beat the New England Patriots in the Super Bowl.

The 26-year-old Pierre-Paul has 42 career sacks, including 12 last season.

Giants quarterbackEli Manningtold ESPN's Chris Mortensen on Friday that he hasn't had an opportunity to speak to Pierre-Paul.

"Obviously he's an important player for us; he's a force on the defensive side. Hopefully he gets healed up," Manning said, speaking at the Manning Passing Academy in Thibodaux, Louisiana. "Get healthy and continue to play football at a high level."

"Obviously, you got to be smart. ... The whole story how it all happened ... you never want to see a teammate or a professional football player get injured in any way, especially in a way that probably could be avoided."

Information from ESPN.com's Dan Graziano and The Associated Press contributed to this report.

Pierre-Paul injuries still lack clarity
Analyst Ed Werder reports on how Jason Pierre-Paul's injuries are still not fully known and how that uncertainty is affecting his future with the Giants.

Timetable for Pierre-Paul's return
ESPN Giants reporter Dan Graziano discusses when Giants DE Jason Pierre-Paul could return from his injuries and adjustments Pierre-Paul will have to make in order to perform at a high level in New York's new defense.