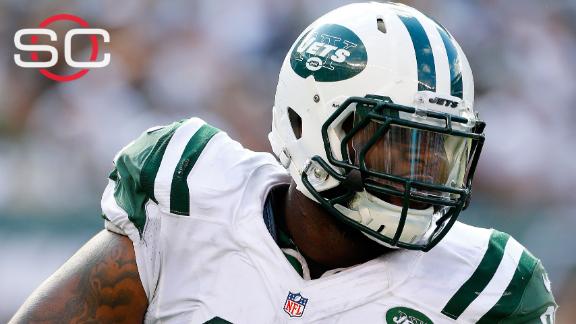 FLORHAM PARK, N.J. -- New York Jets defensive end Sheldon Richardson has been charged with resisting arrest after a July 14 incident in which police say he was driving a car engaged in a high-speed road race near his home in St. Louis, the prosecuting attorney said Thursday in a statement.

A fully loaded semi-automatic weapon was found in the car, a 2014 Bentley, police said, and there was "a very strong odor of burned marijuana" emanating from the vehicle, the St. Charles County prosecuting attorney's office said in a statement posted to its website.

Richardson's car was traveling as fast as 143 mph, according to the statement, and police said a 12-year-old was among the passengers in his car.

The incident occurred only 12 days after Richardson received a four-game suspension for violating the NFL's substance-abuse policy.

Reports of the arrest didn't surface until late Thursday, less than one hour after Richardson, commenting publicly for the first time on the suspension, vowed to stay clean.

"I'm not a dope fiend, man," he told reporters. "I apologized to my teammates and this organization. I told them they don't have to worry about my name being in the news again."

Richardson is scheduled to appear in St. Charles Circuit Court on August 31 for his arraignment.

The Jets were blindsided by the arrest. They had no idea until media reports hit the Internet late Thursday afternoon.Under the NFL's personal conduct policy, Richardson is required to notify the team of issues such as this, and could face NFL discipline for failing to inform the team.

This is a stunning fall for Richardson, the NFL Defensive Rookie of the Year in 2013 and a Pro Bowl selection last season.

Resisting arrest is a Class A misdemeanor in St. Charles County. If convicted, he could be sentenced up to a year in jail and/or fined up to $1,000.

In a statement released Thursday, the Jets said they are gathering more information but declined further comment, noting it is a pending legal matter.

A probable cause statement, released by police, said Richardson endangered the welfare of a child in the first degree. There were three passengers in the car, including the 12-year-old. The others were adult males.

Richardson was the only person charged, but there were no gun, marijuana or child endangerment charges, according to the prosecutor.

Even though police sought a felony charge for child endangerment, the prosecutor's office -- after a two-week investigation -- decided not to charge Richardson because "we didn't think there was enough evidence to support that beyond a reasonable doubt," prosecuting attorney Tim Lohmar told ESPN.com on Friday morning.

"You might think, 'He was driving 143 mph with a child in the backseat, isn't that enough?'" Lohmar said. "There has to be some sort of intent on the part of the actor, causing immediate danger to the child. We looked at it closely, but we felt there wasn't enough."

Officials didn't reveal the identity of the child, but it's believed it may have been a relative of Richardson. In such cases, authorities sometimes find it difficult to prosecute because there can be a lack of cooperation from the child's family.

Lohmar said there were no drug-related charges because police found no marijuana in the car.

"We're pretty darn sure we know what was going on there," he said. "It reeked of marijuana ... but without the (marijuana) itself, you don't have enough evidence to support drug charges."

There was "nothing illegal whatsoever" with regard to the handgun, according to Lohmar. Guns are legal in Missouri, and Richardson possessed it in the proper manner, he said.

Richardson's Bentley sped away to avoid police, exiting the highway and parking in the driveway of a home, according to the prosecutor. Richardson turned off the lights, but police found him because they spotted his brake lights on.

Richardson exited the vehicle, complied with police and was issued a summons.

The probable cause statement, submitted by the officer on the scene, said Richardson was clocked at 122 mph, 135 mph and 143 mph. He sped through a red light and briefly lost control of his car to the point where the rear of the Bentley swerved into the oncoming lane of traffic.

Richardson was ordered out of the car at gunpoint because he was "appearing to reach for something between his feet upon being ordered to stop," the police report said. The loaded handgun was recovered from underneath the driver's side floormat. At that point, police "smelled a very strong odor of burned marijuana emanating from the vehicle."

Speaking to reporters Thursday, shortly before reports of his arrest surfaced, Richardson insisted he was done with marijuana.

"I can say, 'no,' I just chose not to," he said, referring to the violation that led to his suspension. "It was in a depressing time in my offseason, and that's just that. It's just that simple, bro. There's money on the line. My money is worth more than some weed."

By rule, it takes at least three violations to land a four-game suspension. Richardson said he didn't appeal because, "I failed every drug test and missed drug test, so there was no reason to appeal it. I take full accountability for my actions."

Jets coach Todd Bowles, speaking before the arrest became public, said the organization will help Richardson "get help for his problem. .. It'll be a good lesson for him. I'm sure his parents are more disappointed than anybody, and he had to stand that. His actions will speak louder than his words going forward."

Richardson, eligible for the preseason, already has lost his starting job. He was demoted to second team, replaced by No. 1 pick Leonard Williams. Richardson will remain with the backups throughout the preseason, according to Bowles.

"Seeing yourself going from the Pro Bowl to second string, you can't do nothing but be disappointed with yourself," Richardson said.

Jets need to help Richardson
Herm Edwards, Phil Savage and Tim Hasselbeck discuss how the Jets should handle DE Sheldon Richardson, who has been charged with resisting arrest after a July 14 incident in which police say he engaged in a high-speed road race.