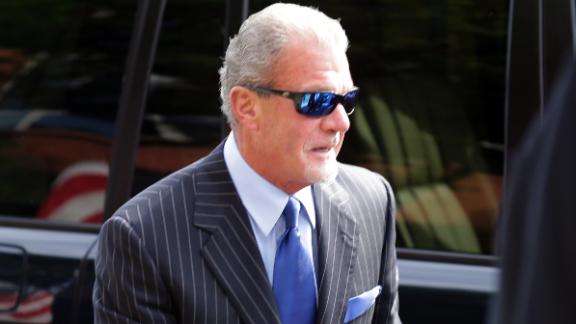 Irsay, 55, who refused comment as he walked down the steps in the back of the Hamilton County courthouse, will also be on probation for a year, during which he'll be tested for drugs.

Irsay's toxicology report showed he had the painkillers oxycodone and hydrocodone as well as alprazolam, which is used to treat anxiety, in his system when he was arrested on two misdemeanor charges after a traffic stop on March 16.

Irsay was sentenced to 60 days in jail, but 58 days were suspended and he was given two days' credit for the day he spent in jail when arrested. His driver's license was also suspended for 90 days more on top of the year he's already received.

He also cannot consume or possess alcoholic beverages and must disclose all prescription medication, attend a victim impact panel and complete the discharge-rehabilitation program during his probation.

"Yes, I've had it in the past ... when I was dealing with the effects after having surgery," Irsay said in court. In 2002, he acknowledged that he had become dependent on painkillers after several years of orthopedic operations but said then that he had overcome the problem.

Under the NFL's constitution, Irsay cannot be fined more than $500,000 unless commissioner Roger Goodell goes to all owners to request heavier penalties. The collective bargaining agreement says that a player with a first-offense DUI misdemeanor would receive no suspension and a maximum fine of $50,000.

Irsay was arrested near his home in the Indianapolis suburb of Carmel after he was spotted driving slowly, stopping in the roadway and failing to use a turn signal. Officers said he had trouble reciting the alphabet and failed other field sobriety tests.

A police report said various prescription drugs were found in his vehicle along with more than $29,000 in cash.

The Colts visit the Denver Broncos on Sunday night to open the season.

ESPN NFL Insider Adam Schefter and Chris Mortensen and information from The Associated Press contributed to this report.