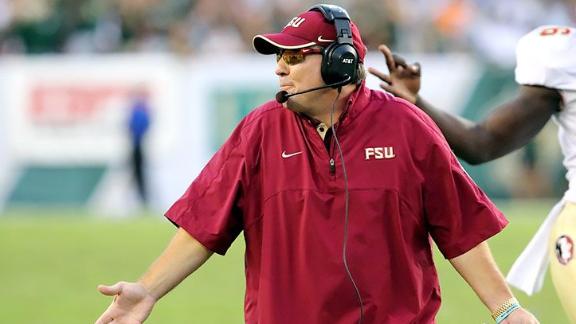 "Well, I accuse him of not knowing what he's talking about," Fisher said Monday. "They're not fake injuries. No one faked injuries, and we wouldn't do that. We'll coach Florida State, and he can coach North Carolina State."

After Saturday's 56-41 loss to the Seminoles, Doeren voiced a few gripes with Florida State's tactics. A handful of FSU defensive players throughout the game needed help off the field, including veteran players Eddie Goldman, Derrick Mitchell Jr. and Terrance Smith.

"The tempo we had was working until all the crazy fall-down things were going on and the clock kept stopping," Doeren told reporters after the loss. "You know the refs can't do anything about that, but it's horrible the way the tempo gets slowed down by these injuries. We went fast in the first quarter; I guess there were no fake injuries."

The Wolfpack's offense has improved dramatically in Year 2 under Doeren, who now has Florida transfer Jacoby Brissett as his quarterback. The Wolfpack racked up 520 yards of offense against Florida State via Doeren's up-tempo pace. NC State at one point held a 24-7 advantage and led for most of the game.

At his Monday news conference, Doeren reiterated his belief that the Seminoles faked injuries but softened his stance somewhat. He also called it an issue not specific to Florida State but rather a college football problem.

"In all five games we've had multiple people fall down and limp off the field and two plays later they are back in there playing," Doeren said Monday, according to The Wolfpacker. "It's a reoccurring thing. It's not just Florida State. There's nothing the official can do about it. There is not a rule in college football. I think it's unsportsmanlike, personally. I just wish there was a rule that if a guy left he has to stay out for more than one play if he leaves with an injury.

"One of the players they stopped the game Saturday, the guy walked off the field as slow as humanly possible, and he's back in the game. I get it, if they are hurt, they're hurt. I'm not going to say a guy isn't hurt, but if they come right back in the game, then he might not have been hurt."

The NC State coach's dismay wasn't limited to just Florida State on Saturday. He also had a bone to pick with the officials, as Doeren felt the Seminoles were constantly holding NC State defenders yet were never called for penalties.

"There was some unbelievable holding by their offensive line that apparently is invisible," Doeren said Saturday.