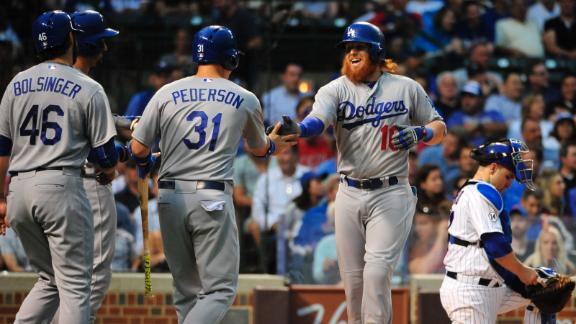 CHICAGO --Cubs manager Joe Maddon, angry with a call on the final play of his team's 5-2 loss to the Los Angeles Dodgers on Wednesday night, lashed out at the replay system, calling for an overhaul that includes "nerds" well versed in analyzing video on the fly.

All reviews are administered at MLB headquarters in New York by umpires who make the final call. Umpiring crews rotate into the role and back onto the field throughout the season.

The play in question occurred with two outs and the Cubs trailing by three in the bottom of the ninth. Right fielder Chris Denorfia lined a ball off the left-field wall that bounced right to left fielder Scott Van Slyke.

Van Slyke made a perfect throw to second base as Denorfia slid in. He was called out on the field, but replays showed he might have gotten his left arm on the bag as he was being tagged on the front of his jersey -- at least that's what Maddon thought.

After a review, the call stood but wasn't confirmed.

"To say there was nothing definitive right there -- I cannot disagree with more strongly," Maddon said. "I have no idea why they would say that. It makes zero sense to me whatsoever.

"If the play was confirmed, I could almost live with that. To say it stands -- it's just not a cool way to go, game on the line. And it was obvious from that one shot he was absolutely safe. No questions asked."

If a play is confirmed, it means replays definitively show the umpires made the right call.

A call that stands reverts back to the call on the field as replay officials determine there wasn't enough evidence to overturn.

Denorfia said he never should have been in that situation with sluggers Anthony Rizzo and Kris Bryant due up behind him with his team down three runs.

"I wasn't expecting it to end up like that, for sure," Denorfia said. "It's not a smart baseball play. It's something I know not to do, to get thrown out when we're trying to put an inning together. A lot of things went good for them on that play. The ball bounced right to him, he put it right on the bag, but it doesn't matter. I shouldn't have gone to second anyways."

Denorfia felt that if he had been originally called safe, that call would have stood as well. He was asked whether he actually did get his arm to the bag before being tagged.

"I don't know," he responded. "At the time I was pretty angry at myself for doing that.

"I thought it was too close to overturn."

His manager didn't think so and would not criticize his outfielder for attempting the double despite being down the three runs. His feeling is if you're sure you're going to be safe, then go. And in Maddon's mind, Denorfia was clearly safe.

"I cannot believe the conclusion," Maddon continued. "I wish whoever made that call could have been at Wrigley Field looking at our big screen if they wanted to see something definitive.

"That might be the worst non-overturn I've seen to this point. Did I make that clear?"