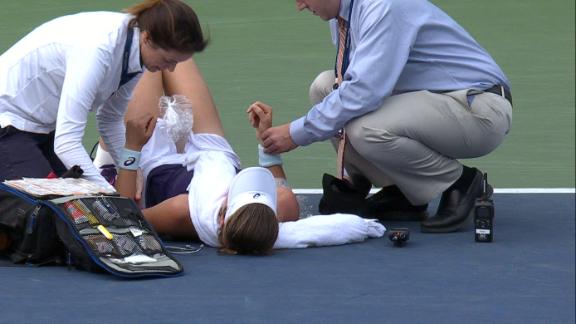 NEW YORK --Johanna Konta suffered a health scare when she collapsed on court in 80 percent humidity during her second-round match at the US Open.

Having won the first set against Tsvetana Pironkova, the British No. 1 appeared to be struggling in the conditions at Flushing Meadows and was red in the face, with temperatures also reaching 31 degrees Celsius on Wednesday.

She began to hyperventilate while serving to force a tiebreaker in the second set on Court 13 and then fell to her knees on the baseline.

Konta gasped for breath as she sat down on a towel with bags of ice under her arms before the trainer arrived. She then lay on her back as the trainer and doctor took her blood pressure before helping her back to her chair.

"I feel like my whole body is in shock," she told the doctor as she had her legs rubbed with ice in her chair. "My heart rate went up; my vision became blurred."

Play eventually resumed after several more minutes, and Pironkova quickly wrapped up the second set, with Konta then leaving the court for a comfort break.

Still red in the face, the Briton returned to continue the match and immediately broke Pironkova before taking a 2-0 lead in the deciding set.