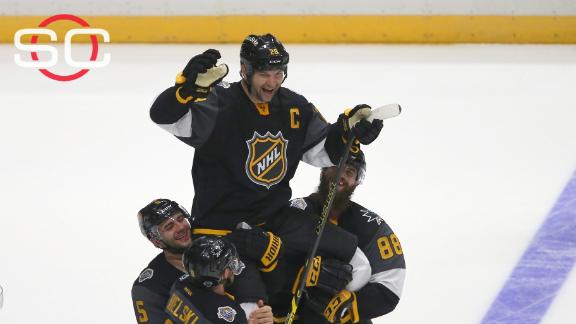 NASHVILLE, Tenn. -- John Scott sat on his teammates shoulders while fans chanted "M-V-P! M-V-P!" and the NHL finally got out of the way.

The people spoke up for Scott once again Sunday night in making the career journeyman enforcer the All-Star MVP as a write-in candidate, after voting him into the 3-on-3 All-Star tournament as captain of the Pacific Division.

Scott scored twice during the tournament, which brought cheers from fans and smiles from teammates, who relished every moment along with the gentle giant and his goofy grin.

Scott captained the Pacific to a 1-0 win in the championship.

"It's just another one on the list of stuff that I cannot believe is happening," Scott said of being MVP. "I never in a million years would have believed I was at an All-Star Game, the fans would be behind me like that and score two goals in a game. You can't put it into words. You can't write this stuff. It's unbelievable."

Now Scott's helmet is headed to the Hockey Hall of Fame in Toronto, and his name was trending on Twitter in the United States after a night when he wasn't listed for a social media vote on the three MVP candidates late in the final game.

The NHL did not release details, but fans took it upon themselves to select him in an overwhelming vote for the 6-foot-8 forward with five goals in 285 career games.

"I'm sure he won over a lot of people and got even more fans," Chicago forward Patrick Kane said of Scott.

Fans at Bridgestone Arena booed the MVP options when they were announced and yelled for Scott, who wrote last week that someone with the NHL tried to talk him out of attending. He seemed a bit stunned as he soaked everything in, including being announced the MVP and presented with a Honda Pilot Touring SUV. He also posed with teammates behind their $1 million check.

Scott got nervous only when Sharks defenseman Brent Burns, a former teammate and friend, caught him off-guard and helped hoist the reluctant fighter into the air.

"I'm not a very light guy -- almost 275 pounds, soaking wet about 300 pounds," Scott said. "Yeah, nerve-wracking, especially [because] Burnzie is such a spaz. Again, just another moment on this weekend I just cannot believe. You really can't put into words."

As though to remind everyone of his 542 penalty-minute pedigree, Scott playfully toppled Kane, which prompted the league's scoring leader to drop the gloves in a mock bout.

The NHL changed the format after last year's All-Star Game featured 92 shots and a combined 29 goals in the biggest offensive display in the showcase's 60-year history. This time, the All-Stars combined for 116 shots and 23 goals.

"It still hasn't sunk in that I'm the MVP of the game," Scott told ESPN's Linda Cohn. "It was definitely a whirlwind. I'm enjoying every minute of it, though."

Scott added that the entire week has "been like a dream almost."

"You can't really write this stuff," he told Cohn. "To be able to come to the game, first of all, and then meet all the guys and have them kind of accept me, and then have the warm embrace by the fans, and then to go out there and win the tournament and to be named MVP ... It's just crazy."

Asked about his teammates' saying they wanted to win this game for him, Scott said, "It just gives me goosebumps."

"These guys are superstars, and I've looked up to them for a long time," Scott said. "For them to say that means a lot."

This event looked much more like the hockey the league plays during the season. Their plan was the 3-on-3 overtime format for a tournament pitting the four divisions against each other in 20-minute games. The winners of the first two games advanced to a third-period championship.

"I broke a better sweat than last year, for sure," Philadelphia Flyer and Metropolitan Division forward Claude Giroux said.

Goalies split the work, with 10-minute portions each, and actually got chances to stop shots rather than being targets in the net. Florida's Roberto Luongo and Jonathan Quick of the Kings each made great saves to keep the first 10 minutes of the championship game scoreless, and Quick stopped Jagr in the final seconds before intermission.

Scott, the personable enforcer toiling in the minor leagues for now, stole the show.He scored the Pacific's first goal on a tip-in just 47 seconds into the second minigame. He added his second goal on a wrister at 13:27 of the period.

A fan campaign made Scott captain of the Pacific Division before the Arizona Coyotes traded him on Jan. 15 to Montreal, which assigned him to the AHL. He will return to the AHL to Newfoundland in Canada with lots of prizes, after fans chose Scott over the finalists offered by the league's hockey operations: Luongo, Calgary forward Johnny Gaudreauand Edmonton forward Taylor Hall.

Scott's two goals tied Hall, Daniel Sedin of Vancouver and Nashville forward James Neal for the most goals at this event. Scott's wife, Danielle, is pregnant with twins due within the next two weeks, and the couple will be heading to Michigan during the American Hockey League's All-Star break.

She said this experience has been overwhelming.

"I jumped up when he scored his second goal, holding my two kids, and I'm like, 'Oh my God, I better stop and relax,'" she said. "We'd like to have the babies at home."

Anaheim forward Corey Perry scored the lone goal in the championship at 13:38.

Pittsburgh defenseman Kris Letang blocked a shot, and Montreal defenseman P.K. Subban sprawled on the ice to help protect a one-goal lead in the final seconds of the Atlantic Division's 4-3 win over the Metropolitan. Tampa Bay goalie Ben Bishop stopped a couple shots by Letang and his Penguins teammate Evgeni Malkin inside the final minute to preserve the win.

Goalies also got into the offensive action and took advantage of more room on the ice. Corey Schneider of New Jersey, Nashville's own Pekka Rinne, Bishop and Anaheim's John Gibson all had assists.

Florida forward Jaromir Jagr, captain of the Atlantic Division, skated in his 10th All-Star Game and helped the Atlantic beat the Metropolitan 4-3.

"I think it's the best possible outcome, right?" Scott said. "We had a good weekend. ... We left winning, so it was great."

ESPN's Scott Burnside and The Associated Press contributed to this report. 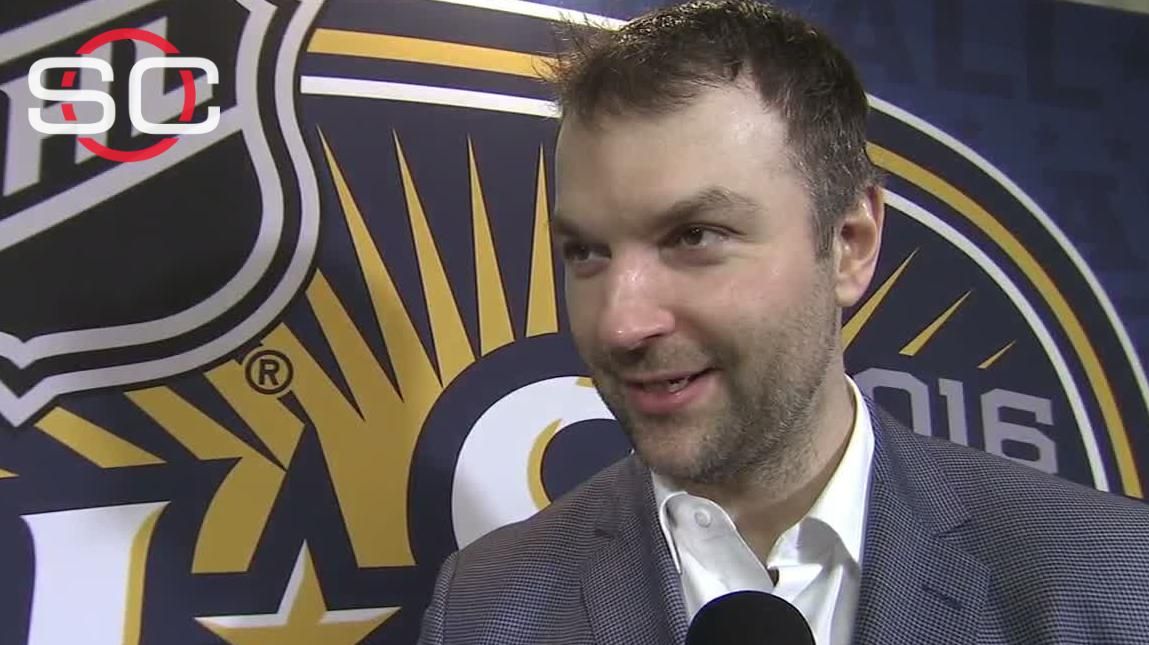 Scott: 'You can't really write this stuff'
NHL All-Star Game MVP John Scott joins Linda Cohn to describe his experiences during the game and the "goose bumps" he felt when hearing that his teammates wanted to win the game for him.