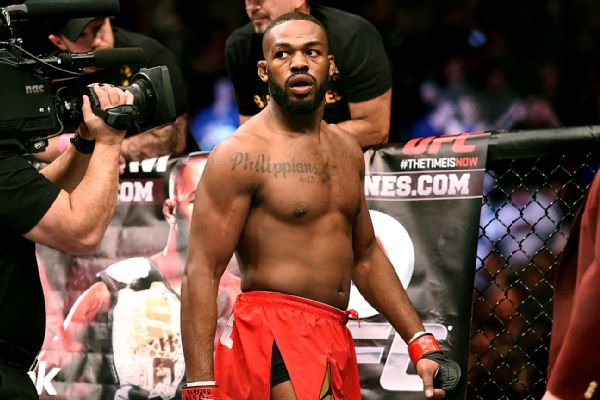 Jones, 29, became the first UFC athlete to enter arbitration with USADA last month, regarding sanctions for a failed out-of-competition drug test on June 16. An independent arbitration panel announced its findings Monday and suspended Jones for the maximum length of one year.

The suspension is retroactive to July 6, the date Jones was pulled from a UFC 200 pay-per-view title fight against Daniel Cormier, which was scheduled for July 9 in Las Vegas.

Jones (22-1) was provisionally suspended in July after testing positive for the banned substances clomiphene and letrozole.

"Although I was hopeful for a better outcome in the USADA ruling today I am very respectful of the process in which they allowed me to defend myself," Jones said in a statement to ESPN. "I have always maintained my innocence and I am very happy I have been cleared in any wrongdoing pursuant to the allegations made that I had intentionally taken a banned substance. I am pleased that in USADA's investigation they determined I was 'not a cheater of the sport.'

"Being cleared of these allegations was very important to me. I have worked hard in and outside of the octagon to regain my image and my fighting career and will take these next eight months to continue my training and personal growth both as a man and a athlete. Thank you to all of my fans, teammates, coaches, sponsors and to the UFC for their continued support."

In a statement, the UFC acknowledged the suspension. "While the decision indicates no evidence of Jones' intentional use of banned substances," the statement read, "it does highlight the care and diligence that is required by athletes competing in the UFC to ensure that no prohibited substances enter their system."

Jones' attorney Howard Jacobs asserted the banned substances entered his system in the form of a sexual enhancement pill he believed was Cialis, a brand form of tadalafil.

Jones stated he received a pill he believed to be Cialis from teammate Eric Blasich "on or about June 14." Jones said he checked with his agent, Malki Kawa, to confirm Cialis is not listed on the World Anti-Doping Agency's (WADA) banned substance list prior to ingesting the pill.

According to Jones' arguments, he later found out the pill was not Cialis, but another form of tadalafil that Blasich had purchased from AllAmericanPeptide.com.

In recent months, USADA independently obtained and tested a supply of tadalafil from AllAmericanPetptide.com and found it to be contaminated with the banned substances for which Jones tested positive.

The three-member arbitration panel, which consisted of arbitrators from England, Finland and Denmark, nevertheless found Jones at fault for the positive test.

In its findings, the panel describes Jones' degree of fault as verging on "reckless," as he did not take appropriate precautions to confirm exactly what the teammate had provided, or supervise Kawa's methods of confirming the medication was not banned.

In its written epilogue on the case, the arbitration panel stated it did not find Jones to be a cheat, but acknowledged his lack of caution resulted in a major financial loss.

"On the evidence before the Panel, [Jones] is not a drug cheat," the panel said. "He did not know that the tablet he took contained prohibited substances or that those substances had the capacity to enhance sporting performance.

"However, by his imprudent use of what he pungently referred to as a 'd--- pill,' he has not only lost a year of his career but an estimated nine million dollars."

Widely regarded as the best pound-for-pound fighter on the planet, Jones has fought just twice since the start of 2015. He was the undisputed light heavyweight titleholder from 2011 to 2015, but he was stripped of the title last year due to legal issues.

Jones is still facing possible disciplinary action from the Nevada State Athletic Commission. A formal date for that hearing is not yet available.