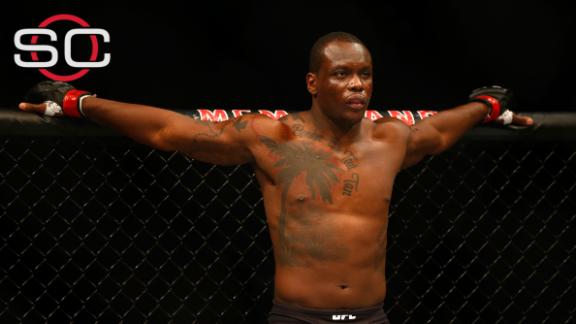 UFC starJon Jones escalated a feud with rival light heavyweight Daniel Cormieron Monday by saying he had little regard for Cormier and calling him "an absolute coward."

Cormier, who pulled out of his April 23 title defense against Jones because of an injured leg, had reportedly offered earlier to train his late replacement,Ovince Saint Preux,for the fight at UFC 197. Jones apparently took issue with that and fired the opening shot in a war of words between the bickering UFC fighters.

Cormier didn't take kindly to that.

He fired another jab at Jones as part of an angry flurry of tweets.

The exchange came three days after Cormier withdrewfrom his scheduled light heavyweight title rematch against Jones because of an injured left leg. Cormier (17-1) lost to Jones in a prior meeting at UFC 182 in January 2015 but won the title in his next fight, after Jones was stripped of the 205-pound belt due to legal troubles stemming from a car accident in Albuquerque.

As reported by MMAFighting.com, Saint Preux turned down Cormier's offer to train him, but that didn't stop Jones from taking to Twitter on Monday to reiterate his suspicion of Cormier's motives.

Cormier's withdrawal on Friday opened the door for Saint Preux (19-7), who is 7-2 all time in the UFC. A former collegiate football player at Tennessee, Saint Preux, 32, is coming off a decision win overRafael Cavalcante in February. He trains out of Knoxville, Tennessee.

In a statement to ESPN on Saturday, Cormier said his recovery time is estimated at four to six weeks.

"The decision not to fight on April 23 was one of the hardest decisions I've had to make," Cormier said. "I've been scheduled to fight 18 times, and I have made that walk every time. I want to apologize to Jon Jones, Lorenzo Fertitta, Dana White and all of the UFC fans for not being able to defend my title."