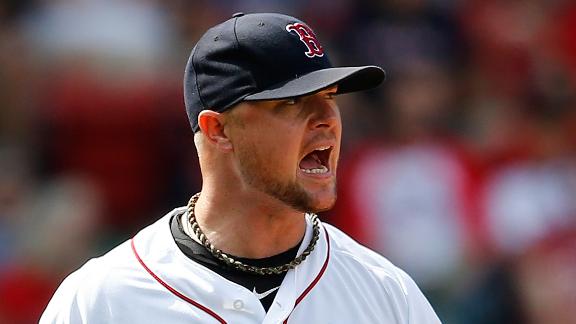 BOSTON -- Jon Lester's agent denied a published report that claimed the pitcher's representatives informed the Boston Red Sox what it would take to sign the ace left-hander, prompting the club's decision to trade him.

"The discussions we had with the Red Sox were confidential and will remain that way," Seth Levinson, Lester's agent, wrote in an email Tuesday. "There is no truth to the report, and I am not going to guess why it was written or the basis for that report."

The Boston Globe reported Tuesday that the Red Sox had been informed of what kind of contract the pitcher has been seeking, "and that led to the team putting its ace on the trade market." The story, citing a major league source, went on to say that Lester was seeking "a competitive offer consistent with the market" and speculated that would be in the range of $22 million to $24 million annually.

Lester, who rejected a four-year, $70 million offer in the spring, has adhered to his pledge of not negotiating with the Red Sox until after the season. Team executives approached his agents around the All-Star break seeking to reopen talks but were told that Lester -- who, with a 10-7 record and 2.52 ERA, is in the midst of arguably the best season of his career -- remained firm in his desire to wait.

The pitcher has reiterated that he would like to remain with the Red Sox and even would be open to re-signing with the club if he's traded, saying he would bear no ill will toward the team if it does move him. The words "hometown discount," which Lester used last winter when talking about a potential deal, are a distant memory in the conversation, at least publicly.

The Red Sox, mindful of what the market for elite free-agent pitchers is likely to be this winter -- Detroit's Max Scherzer turned down a six-year, $144 million offer from the Tigers this week -- could have signaled a willingness to make a market-driven offer, which might have worked to reopen negotiations. They have not done so, which has led to the increasing probability that Lester will be traded by Thursday's non-waiver deadline.

ESPN MLB Insider Buster Olney reported Tuesday that executives who have dealt with the Red Sox believe they will trade Lester (and others) before Thursday's deadline because they can extract more value now than they would by taking a compensation draft pick if Lester signed with another team as a free agent in the fall.

A league source told ESPNBoston.com's Joe McDonald that the likelihood of a deal has increased because the demand for Lester's services has risen steeply. The Red Sox, however, are not yet at the point where a deal is imminent, the source said.

Boston is asking for a high-end prospect to anchor a deal that would involve other prospects, according to Olney. A major league source told ESPNBoston.com's Edes that the Red Sox are asking for a "king's ransom" in return.

The Pittsburgh Pirates are among the teams to have interest in Lester, a major league source said, confirming a Yahoo! Sports report. The Pirates also have interested in Red Sox lefty reliever Andrew Miller.

Lester, meanwhile, addressed the speculation in a tweet Tuesday.

Thanks for the love y'all! Grateful for everyday I get to wake up a Red Sox! This game can be uncertain at times, just gotta roll with it!