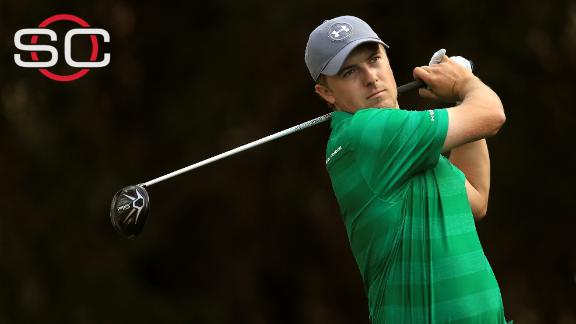 PALM HARBOR, Fla. -- The downside of being Jordan Spieth these days is there at times appears to be a referendum on every shot, every hole, every tournament.

And if any or all of those things are not up to the standard he set a year ago, look out.

Spieth expressed regret Friday for reacting to a social media heckler a day earlier,in the aftermath of his opening-round 76 in the Valspar Championship.

"You'll probably never see me do that again because obviously it was seen and known and -- just really frustrating,'' Spieth said after a 3-under-par 68 helped him make the 36-hole cut at Innisbrook, where the No. 1-ranked golfer in the world is the defending champion. "There's really not a point. I should never respond to any of that, just let it go and by the time the next tournament rolls around no one even remembers it anyways."

A common refrain whenever Spieth struggles is that his storybook 2015 season was built on the back of unsustainable putting, that his great play can't last because he'll never again putt like that.

The statistics do not back up that theory, but it persists nonetheless. And Spieth, clearly agitated after a tough day, decided to fight back on his keyboard, there for all to see -- until he took it down.

"I was a bit bored yesterday afternoon and I was just looking at my feed, and after a tough round not good things are popping up. So you can imagine if someone was talking to you like that. ... Anyway, I got over it quickly.''

Spieth, 22, who trails leaders Steve Stricker andWill MacKenzieby seven strokes, had responded to an Instragram user who posted: "If his putter is not working, he's garbage. Every other aspect of his game is very average.''

While Spieth has acknowledged that he has not putted as well as he would like so far this year, it was hardly the only aspect of his game that enabled him to win the Masters, U.S. Open and the PGA Tour's FedEx Cup in 2015.

He won a total of five times and was player of the year in part due to excellent putting, but also because he was fourth on the PGA Tour in strokes gained tee to green, third in strokes gained overall and third in the tour's all-around statistical ranking. He had the lowest scoring average because of more than just a hot putter.

"Couldn't be further from the truth troll. Go do research before hating,'' Spieth wrote.

He also objected to a post on the PGA Tour's official Twitter account that highlighted a quote Spieth had used in jest following his opening round.

"What good is kicking the door other than hurting my foot and (having to) withdraw?'' Spieth said.

He was joking, but felt that was lost in the PGA Tour's tweet.

"Seriously? That's the quote you're going to use out of that article?''Spieth said.

Spieth added that he had no problem with the story but felt the tweet "made it seem like I was going with getting hurt and (having to) withdraw.''

Such is life for Spieth, who has gone through a bit of a lull after starting 2016 with a victory in Hawaii (the seventh of his PGA Tour career), a fifth-place finish in Abu Dhabi and a second in Singapore.

Since returning to the PGA Tour last month at the AT&T Pebble Beach National Pro-Am, he has not contended, finishing tied for 27th, then missing the cut at the Northern Trust Open (where he opened with a 79) and then winding up tied for 17th last week at the WGC-Cadillac Championship.

Spieth's 68 on Friday should put aside a few concerns. He had slipped to 6 over for the tournament after a bogey at the first hole -- his third of the tournament on a par 5 -- but rebounded with five birdies and a single bogey the rest of the way.

"I just hit some poor shots yesterday,'' said Spieth, who was tied for 43rd. "I knew I wasn't far off. I played well in the pro-am (Wednesday). I've been playing well this week since we've been here. Just was a really off day yesterday with everything.''