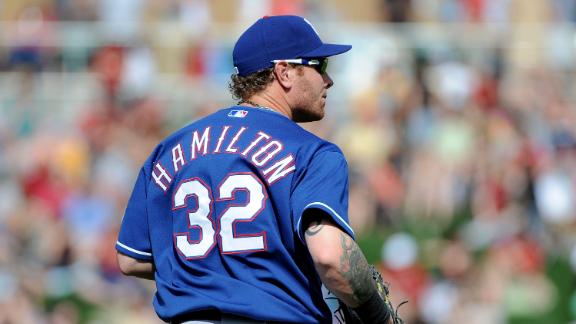 FRISCO, Texas -- Josh Hamilton is headed back to Triple-A Round Rock before rejoining the Texas Rangers.

The Rangers said Wednesday that the 2010 AL MVP would return to Round Rock for home games Thursday through Saturday.Hamilton will then be re-evaluated, and he could be back with the Rangers for a three-game series that starts Monday at Cleveland.

Hamilton wrapped up his four-game stint with Double-A Frisco on Wednesday with his first home run in his 10th minor league rehab appearance after spending almost two weeks at extended spring training in Arizona.

The five-time All-Star didn't discourage the idea of joining the Rangers in Cleveland on Monday.

"I think about four more days will be good," Hamilton said after going 1-for-4 with three groundouts.

Texas reacquired Hamilton last month in a trade with the Los Angeles Angels, who essentially dumped the outfielder after he self-reported a relapse with cocaine and alcohol and an arbitrator ruled he couldn't be suspended by Major League Baseball.

Hamilton, who had two disappointing seasons with the Angels after signing a five-year, $125 million contract in 2013, underwent shoulder surgery before reporting the relapse. He's on the disabled list.

He described the decision on his return as collaborative, the product of "honest" feedback from the club and him.

"In the past obviously I would have forced the issue to get back," Hamilton said. "But I'm not forcing the issue now. I'm trying to grow up a little bit."

Hamilton, whose home debut is likely to be May 28 against Boston, has been getting warm receptions from minor league crowds about 40 miles from his home ballpark. The cheers had a distinctly high pitch for an 11 a.m. start Wednesday, with thousands of schoolchildren spending a day out of the classroom.

And Hamilton, who is hitting .371 with five extra-base hits and five RBIs, isn't complaining about three more days in the minors. He switched to Frisco because Round Rock made a trip to Colorado, and now the RoughRiders are headed on the road while the Express come back home.

And his unique spring training will end.

"I've been going at it every day pretty much, just mentally ramping myself up because I know it's got to be done," Hamilton said. "Spring training, you've got a little more time to get there."

The time is getting close for Hamilton.